You are here: Home / Preview / The legend of Zelda: Link's Awakening, final impressions: revealing its magic 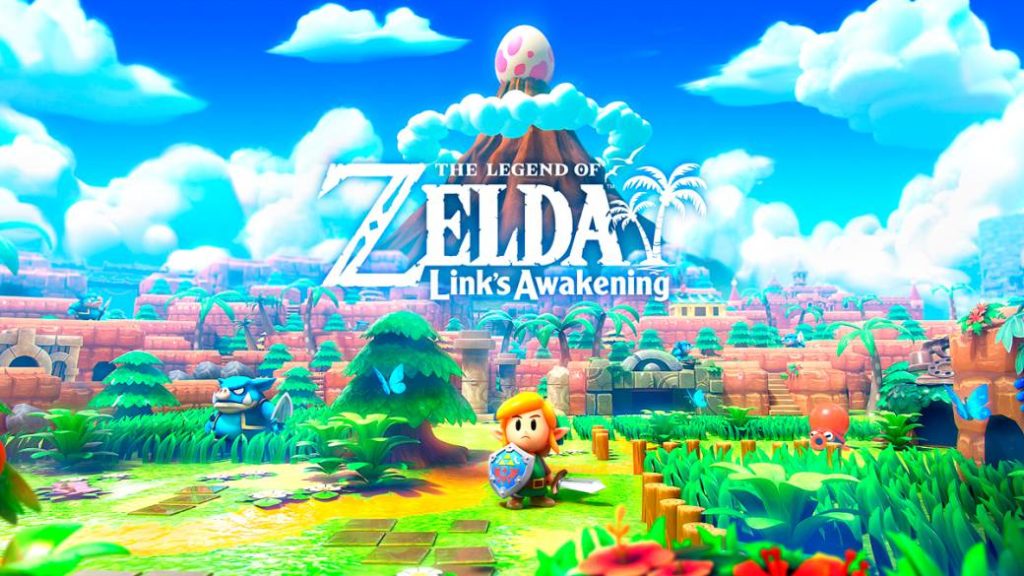 Koholint Island manifests itself again in a very particular adventure that, after a first remake made in 1998 for Game Boy Color, aims to make us passionate about the definitive version of the classic. We have played it; We are enjoying it.

You enter a small wooden cabin – away from the stalking of the moblin seated in the surroundings – and, for a moment, calm floods the place. There is no one, it is hardly right to distinguish a small desk in the background, and the cracks that let light pass through are barely projected on a battered closet erratically: it seems that even the hinges have been rusty for years.

In this house you feel something strange; and that something floods your soul as an adventurer. But melancholy also claims its place in the room. It is an uncomfortable feeling, it makes you feel unhouched and really wondering what you do on Koholint Island, why you can't get out of there unless you fulfill your mission and what challenges await behind the Yarna mountain range. Inside this house inhabits, in a strangely familiar way, the essence of the game that marveled us in our childhood, and that aims to do the same today.

The Legend of Zelda: Link’s Awakening is born through the idea of ​​adventure, but we are not talking about the one that, with epic proportions, counts from the beginning with a hero and antagonist preparing what is about to happen. It is born of chance, from a series of unfortunate misfortunes that end with an exhausted Link of his last journey, lying on the beach of a mysterious island and having strange nightmares before opening his eyes next to Marin. 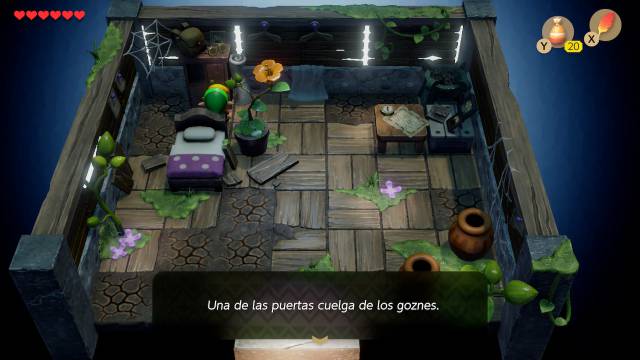 It is something that accompanies us throughout the adventure and, given the new artistic direction of the game that we have in hand, the love placed in the animation and design of each of the elements that make up Koholint Island (characters included), He does it more effectively: the remake we have in our hands, after several hours of play, some dungeons overcome and many secrets revealed, has the magic of yesteryear and, in addition, the dressing with its own particular recipe.

Link, wake up, the time has come

In these final impressions we want to transfer our feelings with the game. Driving Link through this miniature world is an experience that combines fun, nostalgia, ingenuity and charm in equal parts. It has its pros, also its cons, but generally speaking we can affirm, without fear of being mistaken, that we are facing a charming video game that engages in an unstoppable way.

The first thing that surprises us – and even disappoints, we have to be honest – is that Link control does not obey an analog system. Exact: that smooth movement of titles such as A Link Between Worlds is replaced in this case by an eight-way scheme, similar to that of A Link to the Past or the classic Awakening itself. 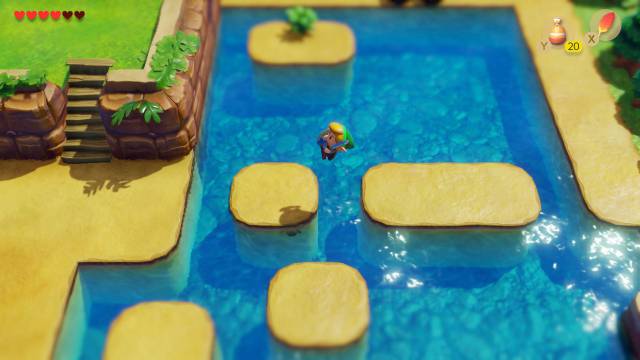 When we have spent several minutes defending ourselves from the rush of the moblin, making some Oktorok bite the dust, and walking through the beach that has seen us shipwreck, the sensations cannot be better: we are facing a fun experience, measured as our own grid under which the entire game is designed, and whose control and feedback to our actions far exceeds the classic titles of those who take over.

That's where we understand the decision: what seems simply based on a retro heritage with which to pay tribute to the saga, becomes a precise interactive experience, supported by a game design practically traced from the original: surpassing the first two dungeons you You realize that you have fought with sub-bosses, final enemies, solved small puzzles, discovered secrets, solved errands based on exchanges, and performed some other secondary task. 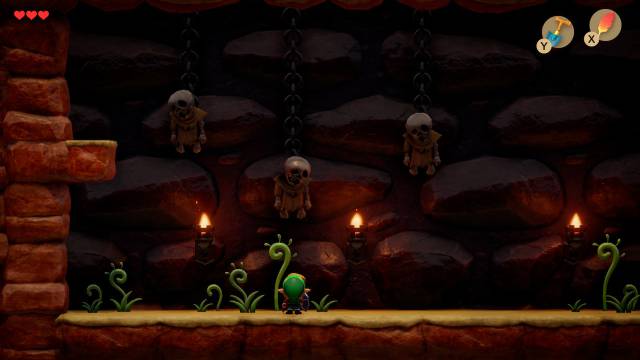 Everything has been subjected to a revision without touching the original bases (there are much less innovations than, for example, in the Samus Returns of Mercury Steam), to make everything work like a great playable puzzle: it is a pleasure to unlock new items , make use of the highly thought backtraking adventure to reveal new areas discovering its secrets, and watch the experience flow while – if we feel like it – dedicate a little time to fishing, make use of the vending machine with hook in order to get some succulent prize , or simply deforest hectares of forest to raise our rupee counter.

As you can see, there is a lot of love in this new version of The Legend of Zelda: Link’s Awakening for Nintendo Switch, although as we move forward in the story, we are also finding elements that we would have liked to see from the point of view of risk. There are small novelties (we have not yet delved into the dungeon editor or resolved the decorative situations proposed by the game, and the new map as well as the notebook are very useful), but we are sorry for the simplicity with which they are resolved The first riddles. 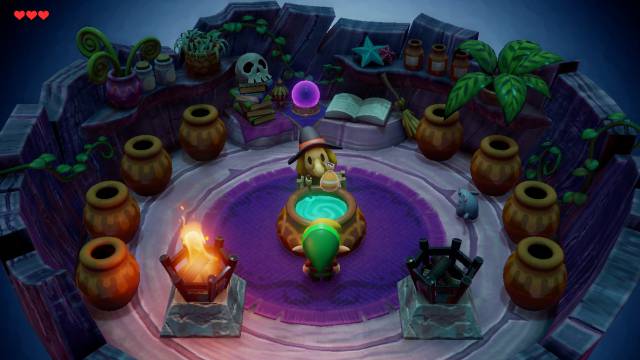 In addition, coming from other more current titles of the saga itself, the game (which worked so well at scale level on the Nintendo laptop) gives us the feeling of being somewhat reduced. We still have a lot to do, and we also have to think about the global adventure as a whole once we overcome it with as many secrets as possible. Of course, on a visual level we have fallen totally in love with the new work developed by Grezzo in close collaboration with Nintendo.

A boy with a new toy

We have talked long and hard about the controversy that raised the aesthetics chosen for the new chapter of the Zelda saga. A long time later, with calm tempers, everything seems to indicate that The Legend of Zelda: Link’s Awakening is going to become a little jewel full of love and good work. 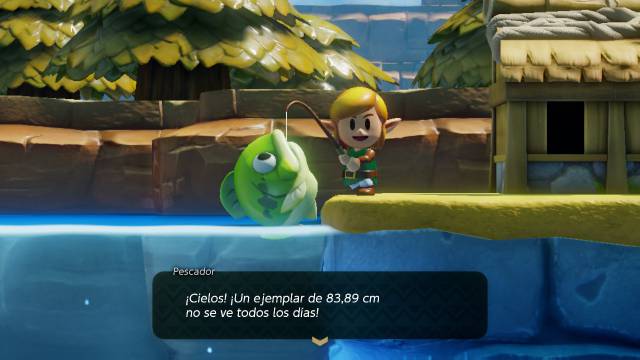 The title moves very well (both in portable and in dock mode), maintaining a rate close to 60 frames per second in most situations and looking quite clear. The animations, with a small squash and stretch effect that makes the characters something soft and charming, are wonderful: everything is moved, modeled and textured with great attention to detail. There are few occasions when it seems that we are enjoying a moving toy model, emphasized by the representation of a shallow depth of field.

All that brilliance has two more gray points. First, when we move from one area to another, there is a background load that lowers the frame rate per second for a very short period of time, approaching the figure of 30fps. When we leave the interior of a house it happens exactly the same, something incomprehensible given the fluidity with which almost the entire game moves – only two areas where water shaders and multiple assets accumulate at the same time lower the rate for now – and the exemplary technical address thereof. 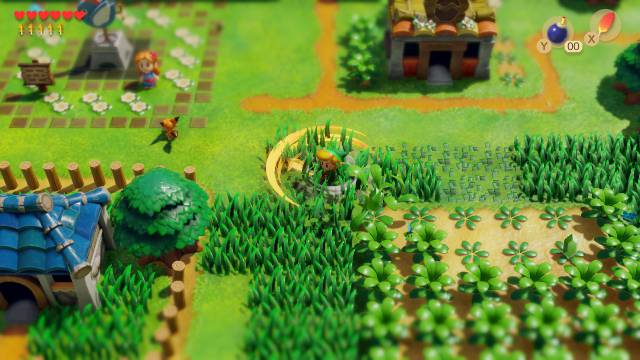 In addition, the blur effect on the remote planes emphasizes a graphic error that concerns the SSAO (Screen Space Ambient Occlusion). The shadows blink slightly, which results in a somewhat uncomfortable feeling in places where a large amount of vegetation accumulates: we have noticed that this effect is most noticeable playing in portable mode.

We do not know for sure if there is a patch planned to mitigate these small defects, or if in the new Nintendo Switch consoles (it has been proven that they slightly improve the performance of colossi like Breath of the Wild) it will be much less noticeable. What we are sure of, adventurous friends, is that we will delve deeper into this journey without equal to, in the final text, assess how one of the most anticipated video games of the year deserves. 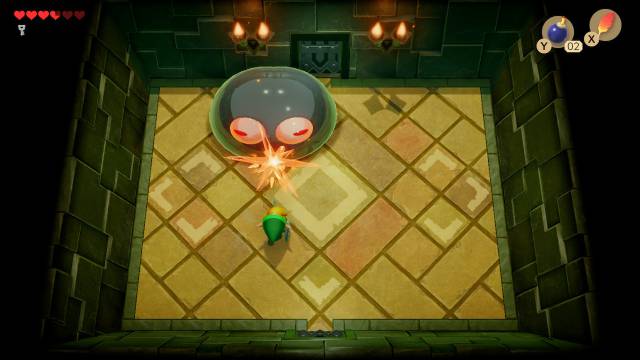