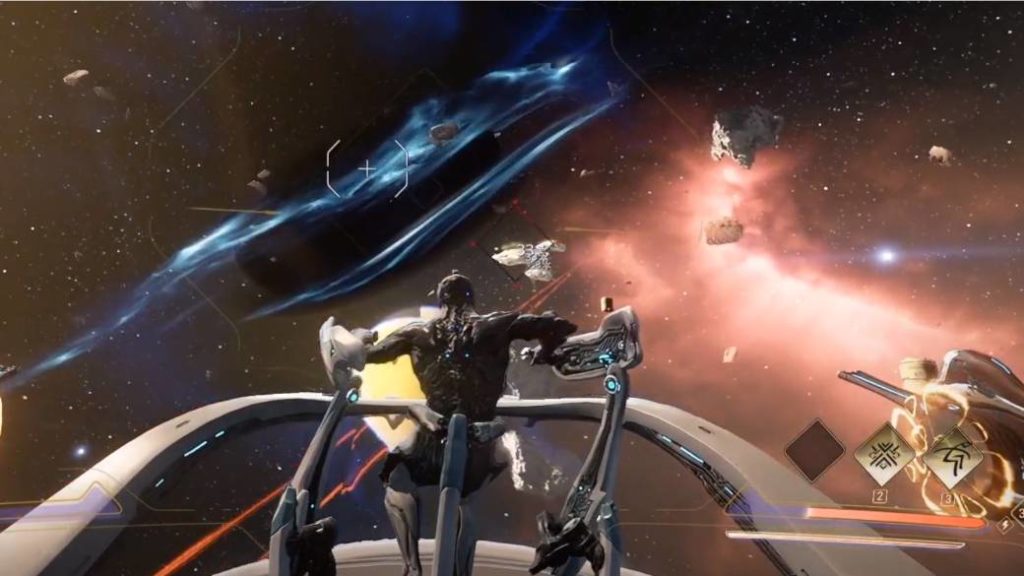 We witness a gameplay of more than half an hour of Empyrean, the new great expansion that will come to Warframe to revolutionize the game and its magnitude.

A few months ago we went exclusively to the TennoCon of Canada, where various news were presented in relation to Warframe, the online title of Digital Extremes that has already conquered thousands of players around the world. On this occasion we have been able to see more than half an hour of live gameplay from Empyrean at the hands of Mark Fujii (PR in Digital Extremes) and Megan Everett (CM of Warframe). This is the new great expansion of Warframe, which is currently in development and will come soon to the game. We tell you in detail below.

The first thing that they detail to us when starting to play is that any player who finishes the main mission and obtains the sufficient level will be able to have his own Railjack. It is a ship specially designed for space interceptions that has a large number of weapons and defensive systems, something that allows them to face large ships as well as individual enemies. 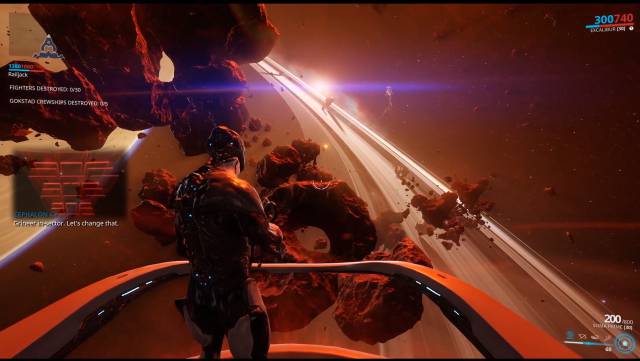 Even so, it is not necessary to have our own Railjack in order to get into the series of missions that Empyrean will make available to us. We can always join the squad of another more advanced player to help you. This is something that they emphasize from the Digital Extremes team, since although the Railjack can be manned by a single Tenno, it is advisable to have three others in order to manage different areas of the ship.

We were able to verify it in detail in the extensive gameplay that we witnessed, in which the player went alone to carry out a complex mission of more than half an hour. He had to take care of piloting the spacecraft, firing at the ships and enemies, repairing the damages suffered when receiving damage in the Railjack, leaving with the flying suit to the space to board other enemy ships and finally destroying the nucleus that had as objective.

Despite being a high-level player who cut the enemies with amazing speed with the help of her katana and had the useful ability to teleport back to the Railjack (something necessary in the Tenno who wish to infiltrate enemy ships) finally He failed to complete the mission successfully. 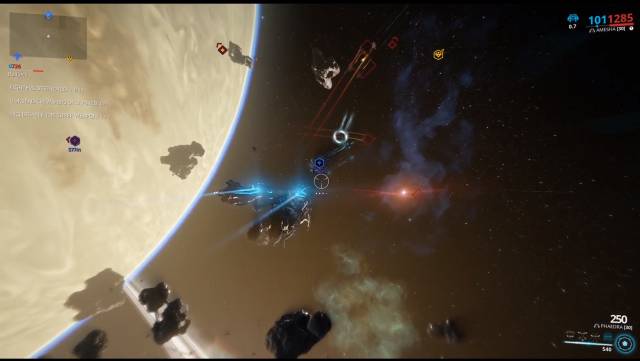 "The battle will depend on the level of our Railjack and our own skill level" – comments Megan during the gameplay.

Therefore, we see how Empyrean will open the door to a large number of missions that will take place at various points around the available planets. The difficulty will vary and each game may be different depending on the method we use to carry out the missions, the number of Tenno in the squad and other factors.

In case we succeed in overcoming these missions we will obtain various rewards among which are parts and improvements for our Railjack. The ship has up to 6 slots in which to place its own abilities, such as making a more powerful shot than the base one. Specifically, in the “Avionics” menu (electronic parts applied to aviation) that we find when we are in our personal dock, it is divided between “Battle”, “Integrated” and “Tactics”. 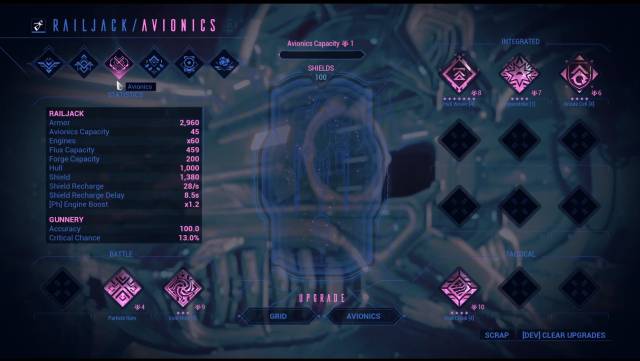 On the other hand, we can add various components that will improve various aspects of the ship among which are: armor, avionics capacity, engines, flow capacity, shields, shield regeneration and motor impeller. As for the improvements in the armament of the Railjack, we find the following parameters: precision, critical opportunity, reduction of detachments, firing speed, sound, reloading, incendiary, etc.

As you can see, there are many aspects to consider and some go beyond the ship itself. As we mentioned earlier, our Tenno's abilities are also related to the proper functioning of the ship in combat. Aspects such as tactics, piloting, artillery, engineering and the level we have in them will be key in order to complete the missions successfully.

The Railjack is highly customizable, so the rest of the menus show us how to change its colors, skins, add the name of the ship and various parts to make it completely ours and decorate it as we want. Of course, the more we advance in Empyrean and the more missions we carry out, the more options we will have to improve the ship and customize it to our liking. 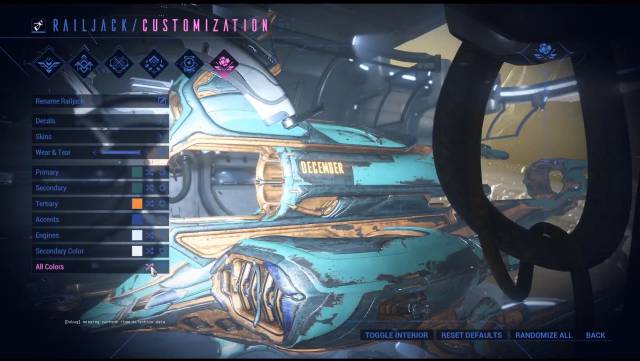 An expansion that will expand the concept of Warframe

We remember that the Empyrean expansion is still a “work in progress”, so we do not know the date on which it will end up arriving at Warframe. Even so, the gameplay that we were shown in this online presentation demonstrates everything that the game has evolved since the last TennoCon. This, in addition to the fact that for the live farewell they assured us that during the gala of The Game Awards there will be some surprise, it invites us to think that the launch date may be announced shortly.

As for cross-play, it is a subject that many Warframe players are pending, since the title is available for PC, PS4, Xbox One and Nintendo Switch. The answer remains the same as a few months ago: "We have it in mind and it is a priority, but due to the complexity involved in implementing it, we are dedicated to developing and finishing Empyrean before focusing entirely on cross-play." 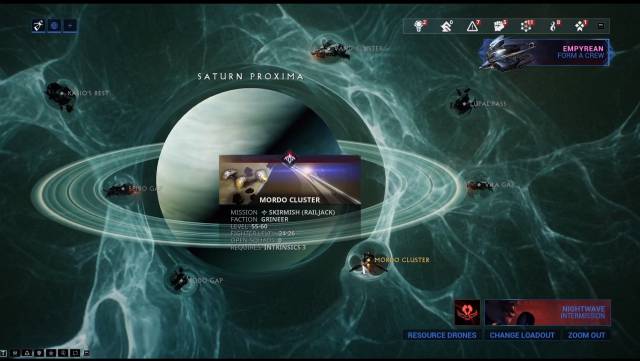 Other doubts that are resolved are the fact that there will be missions of 8 players in Empyrean, since currently the number of members of each squad is limited to 4. The answer was that there are currently no plans to implement it in the game, but still The development team has been testing it internally, so it is not something that is 100% discarded for the future.

Speaking of that future, what there are plans is to expand Empyrean when it comes out and becomes available to everyone. Add new options and make it more extensive as long as players can continue to perform missions in space much longer. We do not doubt that this is true, since the free-to-play of Digital Extremes has not stopped adding new content and updating since it was first launched in 2013. Expansions such as The Old Blood or updates such as The Ancestral Blood go preparing the ground for the arrival of Empyrean, a content that will change Warframe and elevate the concept we have of the game to a new level. 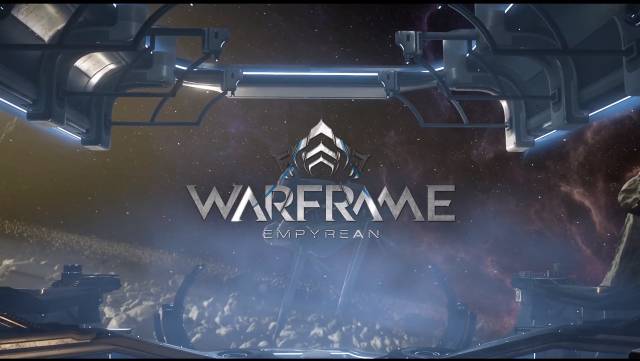