You are here: Home / Apple / Who has seen and who sees you 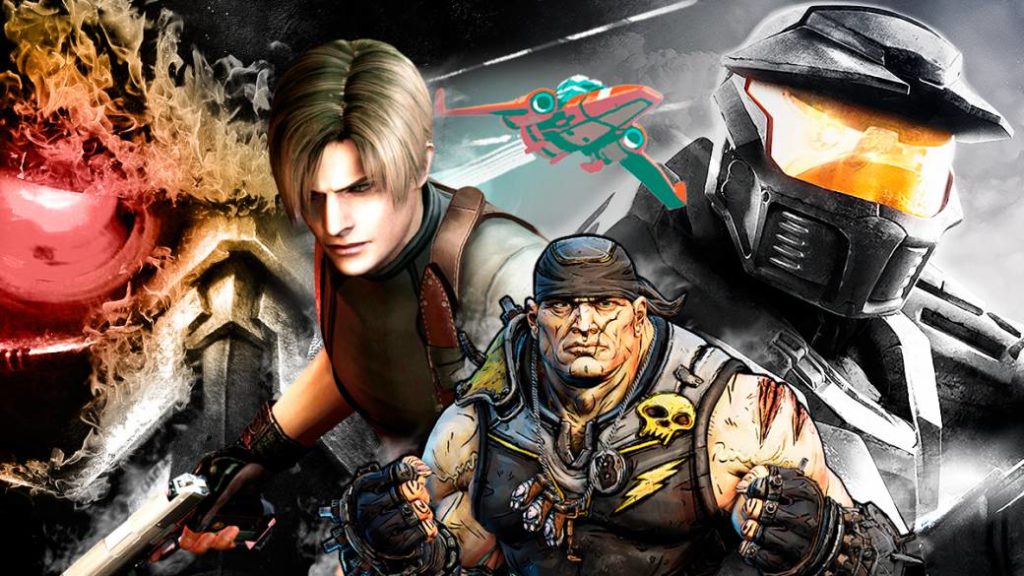 We remember a handful of video games that were devised and presented in one way and, when they reached the general public, they turned out to be something very different

The length of time that the development of a video game tends to be brings with it continuous changes. Sometimes so many and so marked that the product that reaches the user is far from what was shown in the initial teasers for the public presentation of the project. It can be something as radical as the transfer to a new engine, a change of direction in the artistic vision or even a reformulation of the mechanics. We are going to review some of the most notorious cases in this report. There are those who raised blisters because of the disappointment they caused, in others it was the greatest success, also those who managed to straighten a drifting ship after very hard post-launch work. Join us on this interesting journey about what ended up being or could have been.

Borderlands and the bastard children of Mad Max

The Borderlands case draws attention above all for its aesthetic change, although there was more. The crazy Gearbox game was announced in 2007 and underwent a radical facelift in just two years until its release in 2009. The first teaser and the gamplay, which you can see in the video below, showed realistic graphics, vehicles that we could enjoy cooperatively, thousands of weapons, the dangerous and post-apocalyptic planet Pandora as a huge place to explore … As we know, not all of that made it to the final product.

In the Borderlands that reached the users’ rooms, the weapons and their almost infinite combinations or the commitment to the cooperative were maintained, but everything had been covered with a colorful cel shading that was complemented by a hooligan humor. The new comic book tone totally set aside the seriousness of that already distant teaser, belonging to a much more generic product, and threw us headlong into a crazy place full of brains who have lost their north. And we all come out winning.

A few years later, in 2011, Rage was launched, a graphic beast from id Software distributed by Bethesda. Suddenly we had there, bridging the technical distances Gearbox couldn’t have fought against, what seemed like the original Borderlands vision: realistic tone, vehicles and savage violence. So, everyone happy to have enjoyed two very different games instead of two products that are too similar.

There should be few things sadder than seeing a magician trick while performing his star number. It happened to Guerrilla with Killzone 2, a case that was very popular. The two-minute teaser that was shown at E3 2005 was breathtaking for its inordinate quality. It was initially claimed that the game was running on a PS3. The video showed the graphic possibilities on the role of the Sony machine that was going to be released a year later, but of course, in a fully directed short film. Then it was seen that the console was very ungrateful when it came to working with it, and it would take years for the first parties to make a difference on PS3 with Xbox 360, a more developer-friendly machine where third party games worked better, and They will get closer to the dream images of that first trailer for Killzone 2.

Once the magic trick was uncovered, Guerrilla made an effort to emulate it by showing a trailer at E3 2007, this one, more in line with its possibilities. The result felt commendable, although gameplay devoid of the cinematic language of its predecessor made for a much less shocking spectacle. Of course, it didn’t help that it was scrutinized by an expectant press and public. Finally, the story had a happy ending in 2009, when it finally went on sale, as it rose, no less, than with an average score of 91 on Metacritic.

Resident Evil 4, grab me those ghosts!

The development of Resident Evil 4 was long and full of changes, including several regarding the direction of the project. With Hideki Kamiya, the pre-rendered environments of the numbered titles were discarded in favor of 3D scenarios and a more dynamic camera. From this time, at the gates of the 21st century, travel to Europe and Spain in particular in search of documentation come. The game that was being forged was so different from Resident Evil that it led to an independent project resulting in Devil May Cry, a game that would eventually lay the foundations for a new franchise after its launch in 2001. At the end of that year it would officially begin, so yes, the development of Resident Evil 4.

The game was presented 40% complete under the direction of Hiroshi Shibata at TGS 2002, but little was left of it in the gameplay that could be seen at E3 just a year later. In both videos, Kamiya’s dynamic camera and the more European environment were maintained. It was still an old-fashioned Resident Evil, slow, with scares of the witch’s train and, beware, a parallel dimension like Silent Hill but without its malrollismo, in which spirits appeared. The camera at the time of shooting was placed on Leon’s shoulder, being that important element of the few that survived facing the final product. And it is that just one year later, in 2004, a demo showed what we finally knew as Resident Evil 4. In the video that we put below you can see the three crucial moments discussed.

Resident Evil 4 was a game initially devised as a timid evolution of the classic installments, so it was surprising that it led to such a radical transformation. The result, more action-oriented, despite having its detractors resulted in a game for history that marked a before and after in the franchise.

Prey, when less is more

And if the transformation of Resident Evil 4 was radical, what can we say about Prey’s? The 2017 game developed by Arkane is possibly, along with Dishonored 2 (also owned by the French), one of the great covers of the PS4 / One generation. His playable and narrative mastery has given him the approval of critics and an audience that, without being massive, has elevated him to the cult category. But this Prey is very different from the original Human Head Studios game that we met a couple of generations ago, let alone the sequel that must have arrived around 2012.

That first installment landed in 2006 for computers and Xbox 360, having been initially presented in 1995 for PSX. We haven’t been able to confirm this, but we think we recall that the game was based on a comic book series starring a Cherokee Indian. Innovative at the time, the game mixed science fiction, dimensional portals, and magnetic boots that brought gameplay to ceilings and walls. For the second part, although the start in the alien abduction was maintained, a tremendous turn was already taking place. For now, check out this magnificent 2011 teaser shot in Live Footage Found Footage, a film style revitalized in theaters by Monstrous just three years earlier.

There are hardly any clues as to where the story was going to run, and there are a lot of questions that were released on the table. They even made you want to see a movie with that premise. Well, the following trailer that we put you was presented at E3 2012, and it already answers a lot of questions, such as the role of bounty hunter that the protagonist would have. It is the continuation of the previous video, and mixes cyberpunk and interplanetary scifi in an amazing CGI short that still impresses today.

That Prey 2 was canceled in 2014 for failing to meet Bethesda’s quality standards. The Prey that we know today would be a kind of reinvention of the franchise. A less ambitious and expansive game than Prey 2, but much more original, fresh and risky. Prey in 2017 honored the environment of System Shock, the contextual narrative of the Bioshock and the summation mechanics of the metroidvania in a level design that continually played with our expectations. If at the beginning of this article we said that, thanks to the change in Borderlands, we had two games with Rage instead of one, we could say that leaving behind the initial ideas of Prey 2 made us celebrate the same for the existence of Cyberpunk 2077. Again , the users came out winning with two very different proposals that initially had strong points in common.

Halo, living in paradise without biting the apple

We finished with the first Halo. We share with you the famous video of his presentation at Macworld 1999. Bungie, after leaving aside a first RTS approach, was preparing a third-person SciFi shooter for Apple. What he taught that day in June 99 raised cheers in the room. The company knew that this was the best place to show their work to the world, the exposure that the event offered them was something that was good for them given the difficult financial moment they suffered. The media repercussion paid off when Microsoft appeared ready to buy from the developer. Apple, which had previously refused, tried to throw the bait at Bungie, but it was too late. Microsoft thus had heavy weapons to sell what would be its foray into the world of consoles with Xbox.

The video is not far from what we saw in the first game, but keep in mind that it is a short film edition to show the multiplayer component and the action in the third person. We all know the end of the story: Halo became a first person shooter consolidating the line opened by Goldeneye: Quality FPS were possible on console beyond its reign on PC. The Master Chief became the reference character of the Xbox brand and the game its flagship. Today its multiplayer is legendary and its loyal community is huge.

The critically respected and widely loved franchise has proven that it can outlast Bungie itself, which became independent from Microsoft in 2007 leaving the master chief in the hands of 343 Industries. The expectation is maximum for what the next Halo Infinite has to offer on Xbox Series. Despite the grimaces that his first presentation may have caused, we do not doubt for a moment that he will deliver.

No Man’s Sky and the prayers answered

We end with one of the last cases that has already become a classic. Much has been said about the disappointment of the Hello Games premiere. We are not going to redound on it. Only for the few clueless that remain, we will highlight that No Man’s Sky is today much more than what was promised in principle. The studio has worked very hard all these years to make it so.

The long-awaited multiplayer has arrived, but also support for virtual reality, the construction of bases, underwater environments, a continuous increase in graphic improvements and planetary diversity and richness, vehicles … Many minor updates and several large ones that deserve a name: Foundation , Path Finder, Atlas Rise, Beyond, Next … have resulted in an excellent title that draws a considerable legion of followers. Currently we can see, without hurting ourselves, that presentation trailer of the, ahem, gameplay game at E3 2014. No Man’s Sky has long exceeded its own promises.

All of the above reveals how extremely difficult it is to create a video game. We should be grateful for the effort and talent behind each title. Some of the best playful moments that we will enjoy in our lives depend on that crazy and often insane dedication. Long live video games, yes, but also the passionate professionals who make them possible.