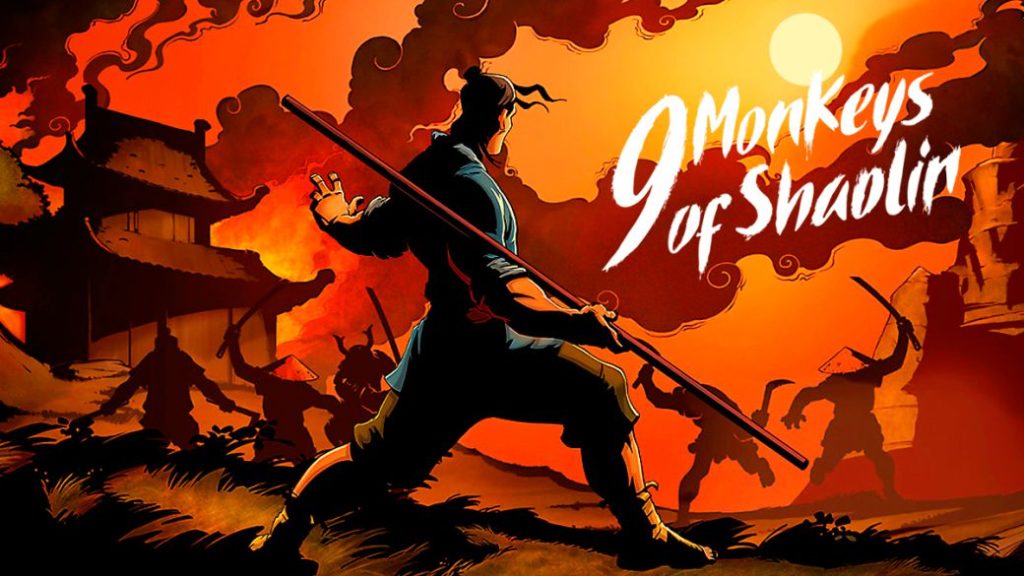 Fans of martial arts and beat’em up will surely be attracted to the 9 monkeys of Shaolin proposal. Let’s see what this new action video game “me against the neighborhood” has in store for us.

When many of us were not even a couple of decades old, our afternoons were spent between school homework, Spectrum video games, cartoon series at the height of Fly or Dragon Ball, and martial arts productions starring Jackie Chan, Bruce Lee, Marc Dacascos or David Carradine, among many others.

That is why the success of video games such as Karateka, Karate Master, Street Fighter, Mortal Kombat, Shinobi or Shadow Dancer was not surprising, being the genre of 1 vs 1 fighting and beat’em up scenarios perfect to unleash our anger ” me against the neighborhood ”.

Within this same interactive context comes 9 Monkeys of Shaolin, an independent side-scrolling beat’em up action title that allows us to move in a limited way through its settings (as in Final Fight or Batman Returns) under a rather striking three-dimensional environment. And these are not exactly easy times to jump into the genre pool, despite the tremendous success of the recent Street of Rage 4. 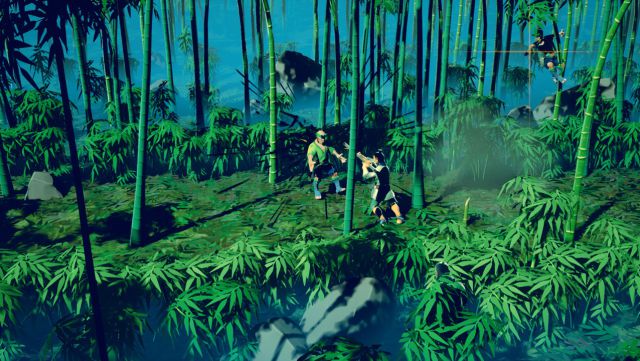 In the game at hand we play the role of Wei Cheng, a young fisherman who seeks revenge after seeing how his family has been murdered, as he embarks on a crusade where he must, above all, perfect his Shaolin arts to achieve a successful conclusion hard commitment.

From the monks themselves you must convince of your worth, you will absorb essential knowledge, techniques and fighting styles to advance in this lateral adventure of linear development, and cooperative options for two players both locally and online. A pity that, despite its attractive aesthetic proposal and its playable potential, the title at hand sees many of its sections relegated to mediocrity. 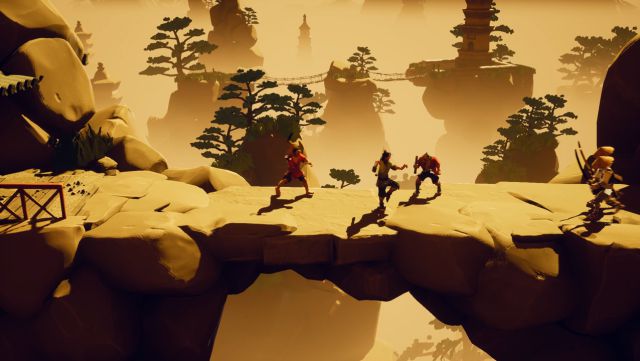 However, let no one raise their hands to their heads: 9 monkeys are entertaining, they offer varied situations throughout their levels and, at first glance, their three-dimensional visual appearance attracts thanks to their minimalist staging. It fulfills its mission, but does not propose a playable design at the height of the greats of the genre, whether we compare it with the classics of the 90s or if the confrontation is against more contemporary productions.

The 9 Monkeys of Shaolin combat system is characterized by its focus on Bojutsu fighting, where mastery with the staff makes the difference from a good fighter to a mediocre one. Despite the fact that at the beginning of the game we will only have two types of attack and one dodge, we will soon be able to reject attacks with circular movements, perform various stunts and even leave our most threatening enemies with hardly any offensive possibilities with the use of the magic. 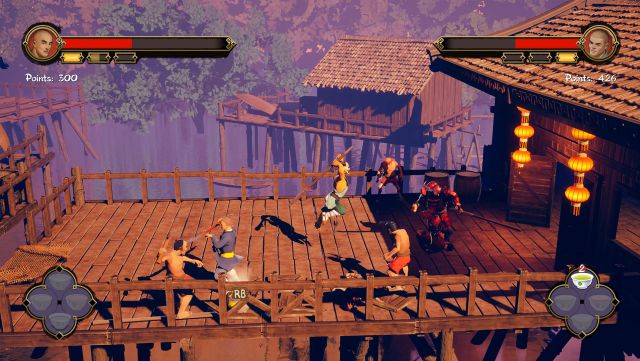 By improving our skills we will see how combat becomes more affordable, our arsenal of attacks and weapons is expanding rapidly and, in addition, our versions loaded with the initial techniques unleash increasingly destructive powers. At first demanding, the game we are dealing with is becoming more and more accessible by spending skill points improving our techniques, something that influences an inverse difficulty curve that, despite being rewarding in that we feel more and more powerful, ends up subtracting almost all the challenge of the adventure. And that the game never ceases to surprise us with enemies from different clans, dressed in different armor and protections, and exhibiting different offensive and defensive forms.

In addition, in order to give more variety to the contests, some scenarios have contextual dynamics that can make things more difficult for us: traps everywhere, circular blades that appear from the ground, jets of fire that threaten to scorch us … Everything flows between the fun offered by the changes in dynamics or the addition of new challenges, and the crudeness of some animations that, in addition, influences a response to our commands that is not too effective in different moments: we end up having the feeling that the Game emerges potential but, unfortunately, it does not usually go beyond the remarkable low in each of its aspects: playable, sound and visual. 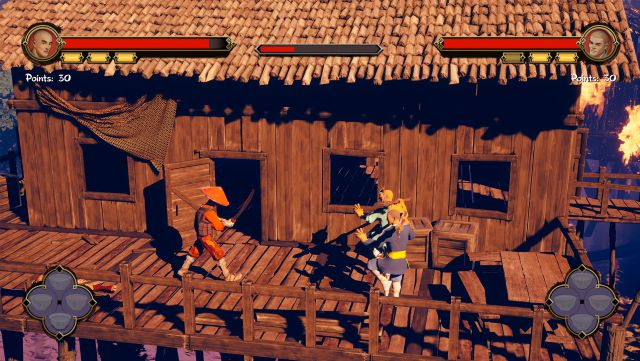 This last element, the visual, is one of the first that catches our attention. The approach to the side scenarios is varied (we will visit temples, caves, villages, mountains and all kinds of locations that remind us of the classic ukiyo e motifs) and the character design, quite attractive. With large hands and a slim torso, the animations with the cane and martial arts techniques are enhanced thanks to the exaggeration of the different elements of the protagonists’ bodies. 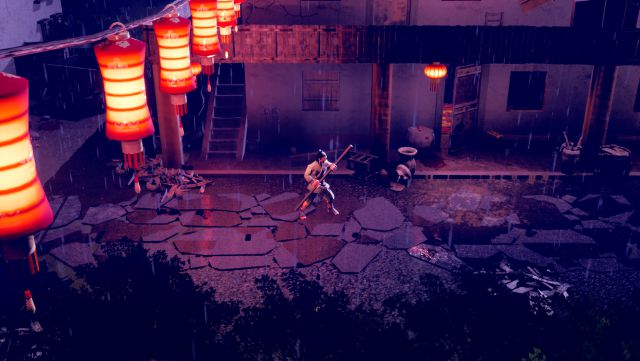 While the light treatment casts beautiful scenes at times, and exaggerated prints of excessive contrast and somewhat erratic use of filters blur the image (especially in dark areas), the overall result is uneven. And it is also in its animations: while some do their job very well, through quite convincing attacks with the Bo, many others are bland and somewhat confusing. All this is transferred to the sound factor: melodies and effects that do their job but are not meant to remain in our memory, something that, unfortunately, can be carried over to the rest of the game.

8 Monkeys of Shaolin is a Beat’em up action video game with many of the elements that have allowed the return of this beloved genre with success: cooperative options, a fighting system with varied techniques, new weapons and accessories to unlock, and the possibility to improve your fighter to face the toughest battles against bosses. Despite this, the errors in the difficulty curve (which make the game very affordable even when playing at high levels), the somewhat erratic playable system and the unbalanced introduction of new interactive dynamics detract from the quality of the final product.