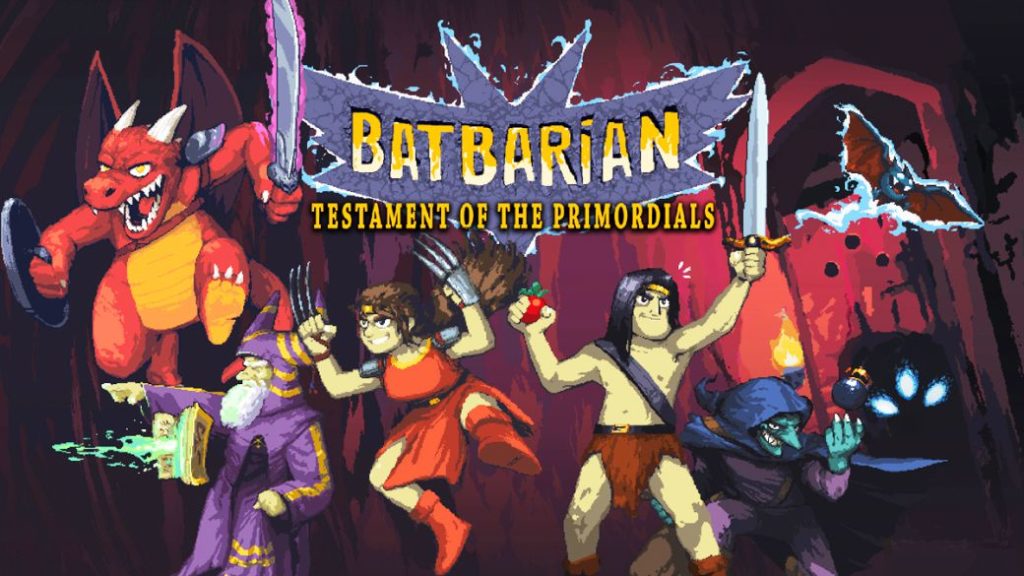 A barbarian and a bat give its name to Batbarian: Testament of the Primordials, a lighthearted metroidvania with puzzles, action and lots of humor.

There are very strange couples in video games, but the one in Batbarian: Testament of the Primordials takes the cake. Hand in hand with Unspeakable Pixels, a bat and a barbarian team up to solve the mystery unraveled by dark caverns. Enjoy puzzles, action and a humor that will not leave you indifferent in this lighthearted metroidvania wanting to surprise everyone who plays it. Hundreds of rumors speak of these caves and there are many who have entered them, but only we will be able to discover their secret.

We have no name or origin. We are a barbarian who accidentally ends up in a moat because of some ogres. But little time goes by to realize that humor is going to be very present in this metroidvania. When we fall we meet our inseparable Pip, a bat that will accompany us throughout our adventure.

This mammal has the peculiarity that it has its own light, so our only way of seeing will be using the bat itself. An original idea, but one that can be annoying. The use of Pip is the pillar on which the whole game is based and that weighs on the vision of the stage and the only way to illuminate it is to throw fruits so that PIp runs to eat them and illuminate its trajectory. 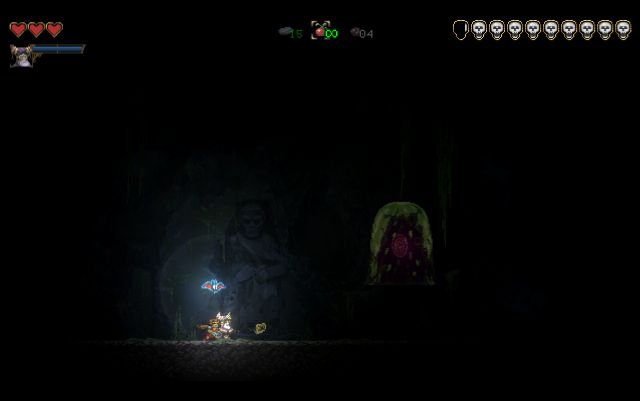 Some objects are simple stones to activate levers or stun enemies, but the rest are fruits with different functions. Some hates them and will attack wherever it snags, while others adores them and will take time to eat them. Unspeakable Pixels uses these objects with great ingenuity so that we never feel the sensation of repetition in the huge amount of puzzles that we will find.

The puzzles are so original that they are scary. These are the great claim of Batbarian and we noticed a great pampering in them for the variety there is and their excellent learning curve. Physics, use of elements, guiding enemies to press switches, the combination between Pip and the barbarian … There are endless and we never tire of them. Without a doubt, it is its strongest point. 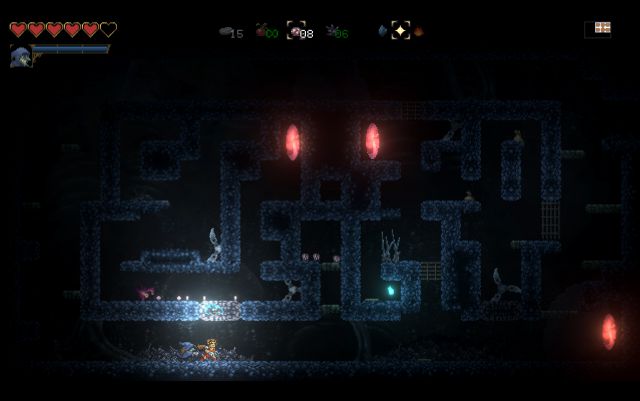 Practically every room is a puzzle to solve. Some simpler to continue advancing in the story, while others are somewhat more complex by offering us objects that will increase our perception, strength or defense. These attributes will also be increased randomly (a roulette wheel) each time we level up, a somewhat debatable decision since we need an equal amount of the 3.

As we progress through the story, we will have new adventure companions who will help us in the fighting or we will unlock stores. These have a fairly limited use, because there is little quantity and those that exist sell consumables or a limited object that will cost us an arm and a leg.

Fortunately, we don’t need them too much, since the main extras are scattered throughout the dungeon in secret passages and false walls. Luckily we can get an item later to make it easier for us to locate it, because there are some very convoluted… luckily the reward is always worth it! 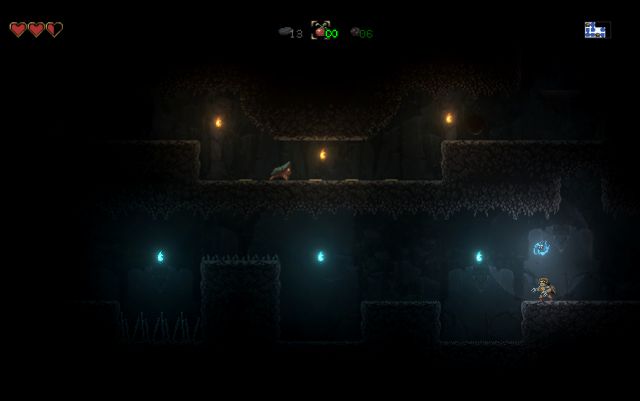 Our protagonist only has one attack that he constantly repeats, with hardly any modifications throughout the game. This greatly limits combat and the variety of enemies suffers from it. However, thanks to Pip this changes slightly in certain areas that require elemental changes in our partner to make the enemy vulnerable.

Of course, although the combat is somewhat simple on the way, when you face one of the final enemies you have to work for a while. Obviating its difficulty, which is somewhat demanding, there are enemies who need to discover what element of the scene can leave him vulnerable or what object can facilitate combat. 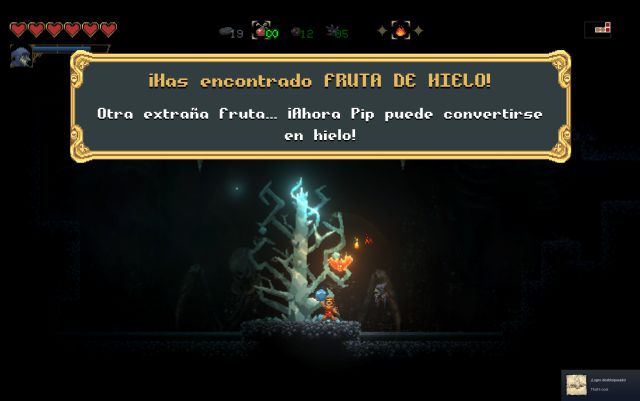 The scenario, like the combat, can become visually repetitive. We understand that the tones and variety should not be very wide since it is a cave, but both textures and fauna are the same almost always. In this aspect we have lacked variety beyond the color of the structure and the change in music, the only clear indicators that informed us of the change of zone.

In fact, the most important areas of the plot are not too inspired, although the change in structures and designs is appreciated compared to the 80% of the remaining mapping. Fortunately, the accompanying soundtrack has reminded us of the most classic adventures of the metroidvania.

The legends were true …

During our adventure, we will find fragments of newspapers scattered around the caves. All this is part of the story that we, as players, must be able to structure and create connections between newspapers. Unfortunately, it sins of being too mysterious, leaving the responsibility to the player to draw his own conclusions and without fully explaining himself. 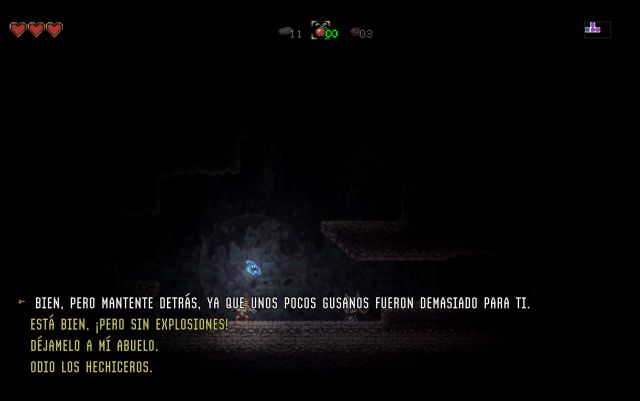 Luckily, not everything is like that, since we have the option of talking with our companions in the rest camps where we will save the game. In them, we can choose which companion will follow us on the adventure or start a conversation to find out their origins or discover something more about these caves.

We can choose much of what our protagonist will say. It does not reach the level of a genre like RPG, but we can be edgy or kind in our responses. It does not matter what you choose because it either does not influence or does it in a minimal way. The fact of choosing the dialogue only leads to alternative conversations that can be more or less funny, a humor that has been quite attractive to us.

This type of humor has enlivened us much of the game. The rhythm is correct and it has not been heavy in its 10 hours of duration, something that can be extended to 15 if we want to complete 100% and unlock the endings of the game, something totally necessary if we want to discover the truth of the caves and find out with clarity of the game’s story. 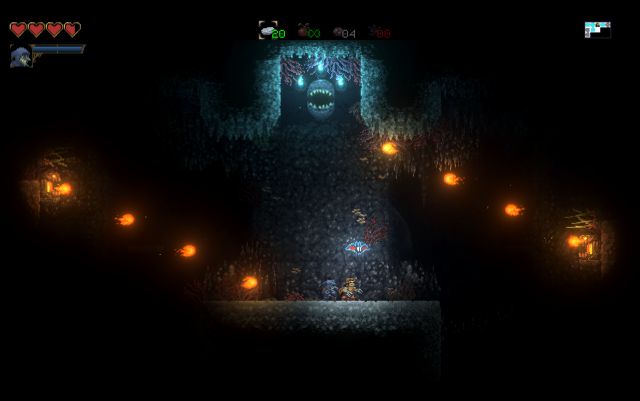 We never thought that such a strange couple had so much to give. Puzzles with Pip are bursting with genius on all sides and you can’t get enough of them. Batbarian: Testament of the Primordials marvels us at the use they have given to light, while we dislike the poor lighting of the stages, something visually poor due to a repetitive and bland artistic style in much of the map.