You are here: Home / Reports / Chrono Trigger, 25 years of an adventure through time, friendship and death 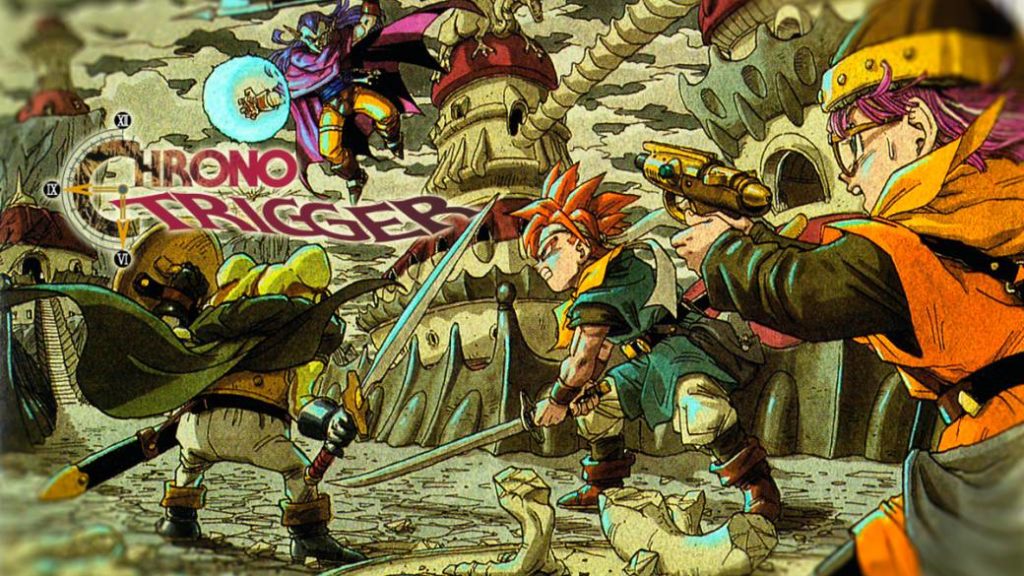 A game for history as a result of the union of one of the most talented teams in Japan.

Hironobu Sakaguchi (Final Fantasy), Yuji Horii (Dragon Quest), Akira Toriyama (Dragon Ball), Kazuhiko Aoki (Final Fantasy) and in the soundtrack, Yasunori Mitsuda and in the final stage of development, Nobuo Uematsu. To talk about Chrono Trigger is to do it, too, about the Dream Team that was formed to develop a unique JRPG, advanced in its time in many of the decisions that were made. 25 years have passed. Chrono Trigger is an inseparable part of the history of the Japanese role and the golden decade of the nineties. A game that was born from the desire of Sakaguchi to create something ambitious and unique. A game that was about to end up being part of the Secret of Mana saga, because time travel (with those who already flirted in the first Final Fantasy) and its development seemed excessively complex, but luckily for everyone, it ended being something unique and special when the plot was given a green light. And much more.

It was in 1995 when Chrono Trigger went on sale, became one of the great successes of the genre and Super Famicom and also made the jump to the United States. The title had all the ballots for, as usual, not to reach Europe. So it was. We could only enjoy it, as so many other times, with the classic adapters that allowed us to place the largest American (physical) cartridges in our European Super Nintendo. That was how some of us were forever attached to a genre and a plot that showed courage and a certain modernity in many of the decisions taken. From the development of the plot to the combat system, also passing through the two well differentiated parts in which the plot happens, Chrono Trigger is able to surprise and shake the player in many moments, from its beginning to the end. And that was not, nor is it, so usual. 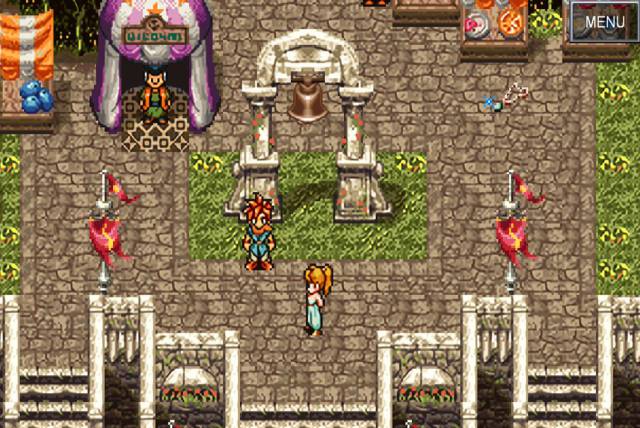 The story revolves around Crono, a young man from a village who one day runs into a mysterious girl. The pendant of this will end up being, time machine through our best friend Lucca (with an undeniable resemblance to Bulma), the door to a journey through time that leads us to a near past, to a future as devastated as technologically advanced , to prehistory and many other disparate moments. While allies of all the times are added, all of them with capacity to be protagonists and not mere companions. And all of them with personality and charisma to form between Crono, Nadia, Lucca, Robo, Ayla, Frog and Magus one of the best casts of characters ever seen.

The designs of Akira Toriyama in the characters and enemies, the spectacular soundtrack in the first major work of Yasunori Mitsuda that, in the final stretch due to a medical indisposition gave way to Uematsu (almost nothing) did the rest. Sakaguchi's ambition with a travel companion like Horii had, with all these names and a comfortable budget – from the first bars there were already more than 50 workers in the game -, the success assured. There is no character that does not give off the best that Toriyama has to his credit, evoking how it could not be otherwise in the nineties to many of the protagonists of Dragon Ball, but with the ability to uncheck and demonstrate with his personality to be worthy of his own universe and not simple appropriations. Next to them there is no melody that perfectly accompanies each moment. From the battles to the final bosses, through the themes of each character, unforgettable as the Frog Theme when he decides to retire for not having fulfilled the promise or the cheerful music that resonates when Robo is repaired after the beating of his “brothers”. The disturbing Zeal Palace can only sound as it sounds: between solemnity and intrigue, in the same way that the Primitive Mountain drums accompany the sound of prehistory. Not to mention the futuristic track aboard the Epoch. A festival of tracks that adapt to the context and the moment. 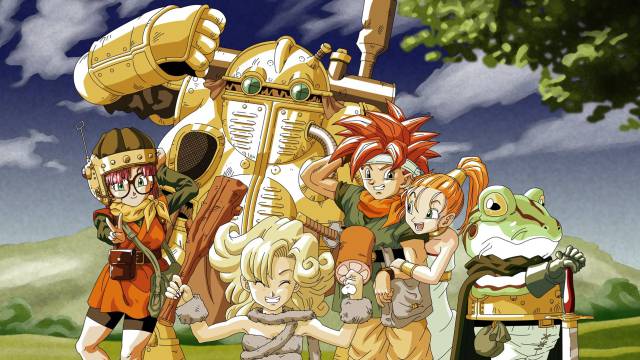 The great adventure, friendship and death

The spirit of Dragon Ball can not only be seen in Toriyama's designs, but also in the concept of adventure that emanates from the first part of Chrono Trigger. The idea of ​​the boy who is going to look for the mysterious missing girl, the friend who goes to meet him and, step by step, trip to travel, the way they have to help new characters who become friends, is part of the type of adventure with which we grew up during the nineties. Only the icing is missing to make it epic and surprising. To each world, more powerful enemies. At every step, more concerns about the future of the planet. Until we reach a Magus arch nemesis who ends up being – if we so decide – traveling companion. And when everything seems ready for the great confrontation, the climax: the death of Crono. There is talk and with reason of the impact of the death of Aeris in Final Fantasy VII, but two years before there was a much greater bet. Kill the protagonist, and be the player who decides if he wants to resurrect him or not. 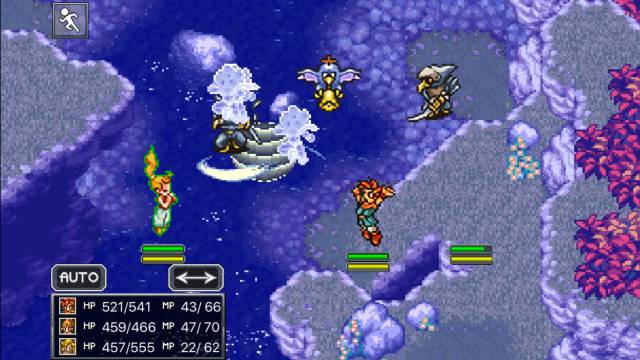 From traditional adventure to freedom

It is precisely in that moment of rupture where there is a narrative change, but also playable. What until now had been hours of linear adventure, with cliffhangers and inevitable situations, become an open map waiting to be explored. With subplots for each of the characters and a much freer development in which we seek to know more about our partners, but also become more powerful (and the concept of training and learning, so Dragon Ball, is fully present here) to be able to , finally, to face the evil that will end the planet if we do not prevent it: Lavos. That second part, in addition, is capable of touching tricky and not minor themes, ranging from the aforementioned death of Crono to what happened to Lucca's mother. The game does not stay on the surface, and delves into every age and moment. 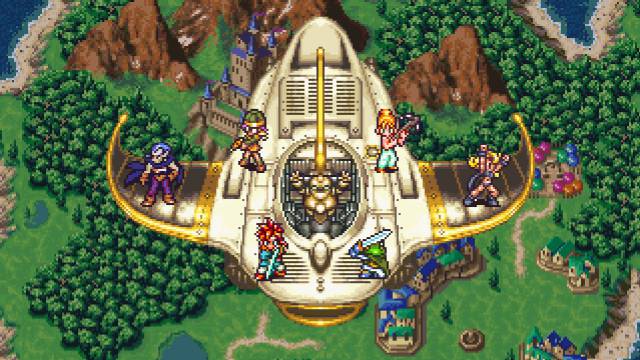 All this, accompanied by an enviable pace of play and without rest. The balance between exploration, dialogues and fighting is noteworthy. Also the development of them. On the one hand, an ATB system inherited from Final Fantasy but with its own peculiarities: yes, until the bar is loaded the combat is asymmetric and therefore we can hit before or be hit prematurely depending on the enemies and the moment. But here also come the combined attacks between two and up to three characters. Wonderful special actions that encourage not only to enjoy them visually, but also to create and develop the teams and synergies (both in attack and defense) that best fit in each moment. Although if you want some advice: Crono-Ayla-Robo. 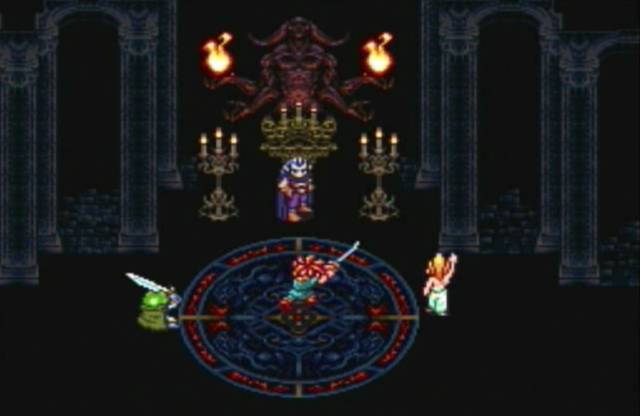 The story that has different endings

Chrono Trigger is a different type of JRPG, which you can finish in less than 25 hours, but that hides behind it a certain playability that makes it attractive: the multiple endings (more than ten). The title is capable of changing the evolution of the story according to the decisions we make: when we go and finish with Lavos, if we resurrect Crono or not … And, with New Game Plus, this is expanded allowing us to see other endings if we continue fighting and finishing with the great enemy of the game at different times, although the demand that we have not had as farmeo of experience and others, there that begins to be challenging. With the later version of Nintendo DS, on which the latest installments have been based – mobile, PC – the Dimensional Vortex was added, a secret area that reveals the future of one of the most interesting characters in the game (Schala) and we introduces a fearsome villain: the Dream Eater. Yes, a way to connect with Chrono Cross. 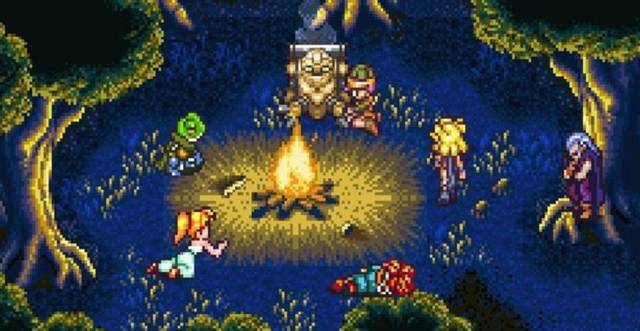 Chrono Trigger is part, along with Final Fantasy VI and the third in discord that you most want, of the JRPG 2D podium of the nineties prior to the 'boom' that Final Fantasy VII supposed. And even then and having spent 25 years, still offering moments, ideas and mechanics that have nothing to envy to current games. Not in vain is the game that managed to beat time.