You are here: Home / Bungie / Destiny 2, Halo 3 ODST, Night in the Woods, and more are coming to Xbox Game Pass soon 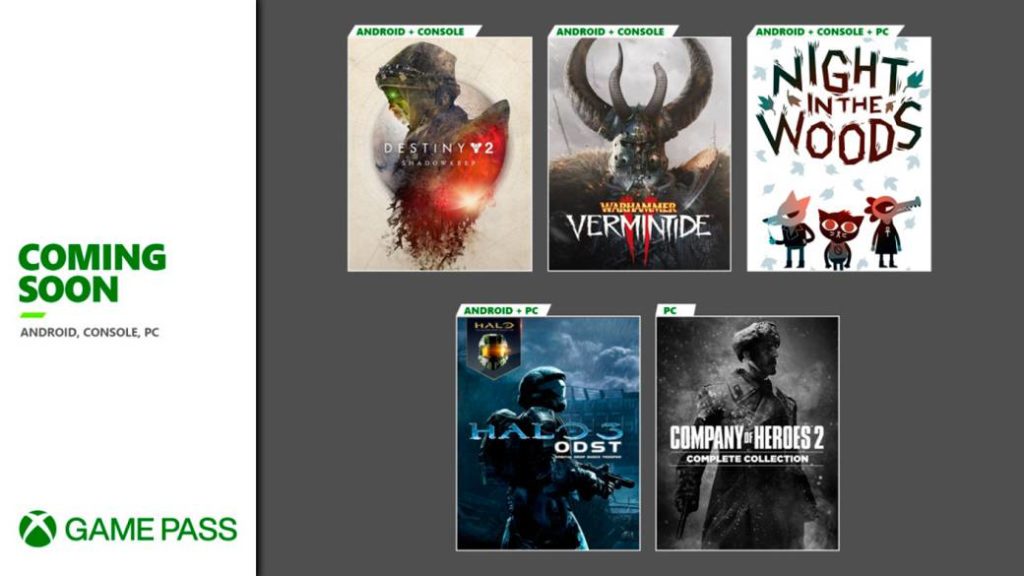 Microsoft announces the next titles that will join its video game service on demand both on PC and Xbox One and on Android through xCloud.

With the arrival of the second half of this month of September, Microsoft takes the opportunity to announce the next titles that will join Xbox Game Pass, its on-demand video game service for PC Windows 10 and Xbox One and that with the arrival of xCloud service, some of them also land on Android devices. And it is that recently, Microsoft also announced the initial xCloud catalog, more than 150 titles that can only be accessed through a subscription to Xbox Game Pass Ultimate.

All the news about Xbox Game Pass

Thus, Microsoft has announced up to five new video games that will become part of the Xbox Game Pass catalog from September 17 and throughout the following days, arriving in a staggered manner. And the first of them is Company of Heores 2, a sequel to the war strategy title that takes us to World War II, available on PC and Xbox One, precisely, from the 17th of this month.

Next up is the already announced Destiny 2 along with the Shadowkeep (Shadowkeep) and Forsaken (Forsaken) expansions, a host of content available on Xbox One and xCloud on September 22. Another novelty of the same day 22 is none other than Halo 3: ODST, which comes to the Microsoft service together with its final launch as part of Halo: The Master Chief Collection.

If we jump to September 24, both PC and Xbox One and xCloud will receive the celebrated indie Night in the Woods, a 2D adventure starring a group of the most peculiar anthropomorphic animals. Finally, on the 24th of this month Warhammer: Vermintide 2 will arrive on Xbox One and xCloud, the successful cooperative game set in the dark medieval world of Warhammer and in which the warriors of Chaos and the Skaven will take center stage.