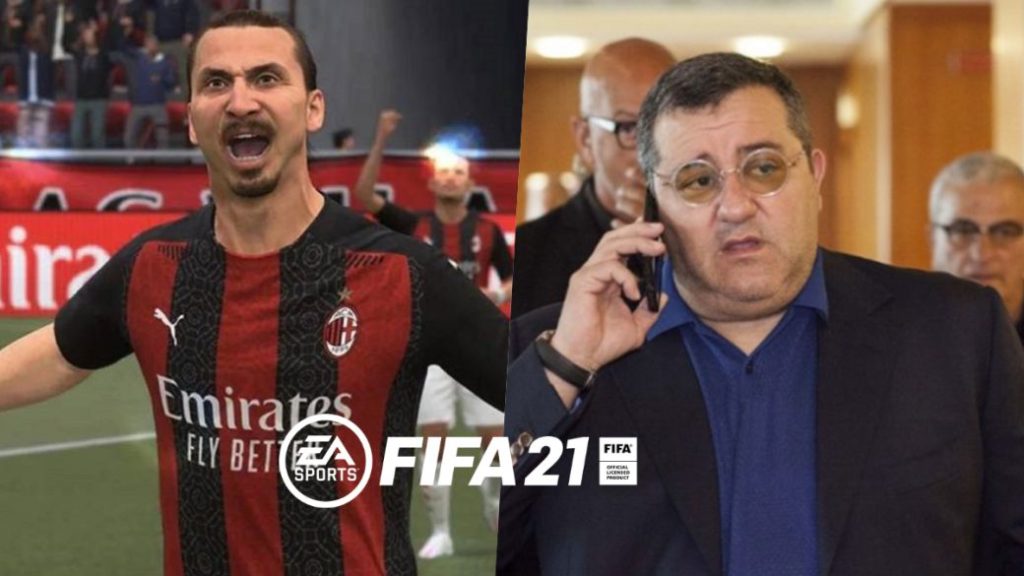 Mino Raiola emphasizes that Electronic Arts is not a non-profit organization, so it intends to fight for the image rights of players.

The 2020 storm continues to throw lightning and thunder. FIFA 21 is already in stores, but Zlatan Ibrahimovic, the veteran AC Milan footballer, has opened a Pandora’s box. Both he and other colleagues question the fact that EA Sports has the rights to use their faces and names in the video game. Meanwhile, the player’s representative, the always controversial Mino Raiola, has not stood idly by. In an interview with TalkSports, he acknowledged that all this conflict arises for a very specific reason, money.

This was acknowledged during the meeting, in which Simon Jordan asked him why he had not already filed a complaint to stop using the player in FIFA 21. “All in due time,” Raiola replied. Neither short nor lazy, Jordan has pointed out that these actions seem more like an attempt to make money than anything else, something that the agent has not denied by any means, quite the opposite.

“It’s all for money,” he commented. “EA Sports is not a non-profit organization, this is for the money, this is for the rights. Also about who exploits these rights. It is also by principle. And why we don’t do things sooner or later is a decision we make and we don’t need to explain now. Raiola maintains that Ibrahimovic retains his rights, not his club or FIFPro, so according to the agent, Electronic Arts cannot use the player in FIFA.

💰 𝗦𝗶𝗺𝗼𝗻: “This is about you wanting to get a commission.”

😡 𝗠𝗶𝗻𝗼: “I don’t give a damn about what your opinion is.”

🤷‍♂️ 𝗦𝗶𝗺𝗼𝗻: “You’re as troublesome to me as a cloudy day.”

⛔️ 𝗠𝗶𝗻𝗼: “This is over.” @ SJOpinion10 vs Mino Raiola is an absolute must watch 🍿 pic.twitter.com/tirZUZawjv

Faced with this situation, FIFPro has issued an official statement: “FIFPro wants to clarify how it obtains the image rights of players and its role in defending the labor rights of professional footballers around the world.” The organization claims that it acquires the rights in about 60 countries. “These rights are available to Electronic Arts or to any other customer in the video game industry.”

According to FIFPro, its relationship with video game companies is complemented by the “separate agreements that companies reach with clubs, leagues, government institutions and individual players. The members of the FIFPro unions decide how to use the income generated in the best way, either by distributing the funds directly among the players or by providing various services (legal, psychological, etc).

EA Sports, for its part, issued a statement defending its position, in which it recalled that it has signed an agreement with FIFPro.

Mino Raiola has revealed that more than 300 footballers have joined the action they are preparing against EA Sports, FIFPro and FIFA. “We will go to the end, if necessary, against FIFA and FIFPro and all those who sell rights that do not they have ”. The representative has even said that FIFA wants players to become “slaves”.