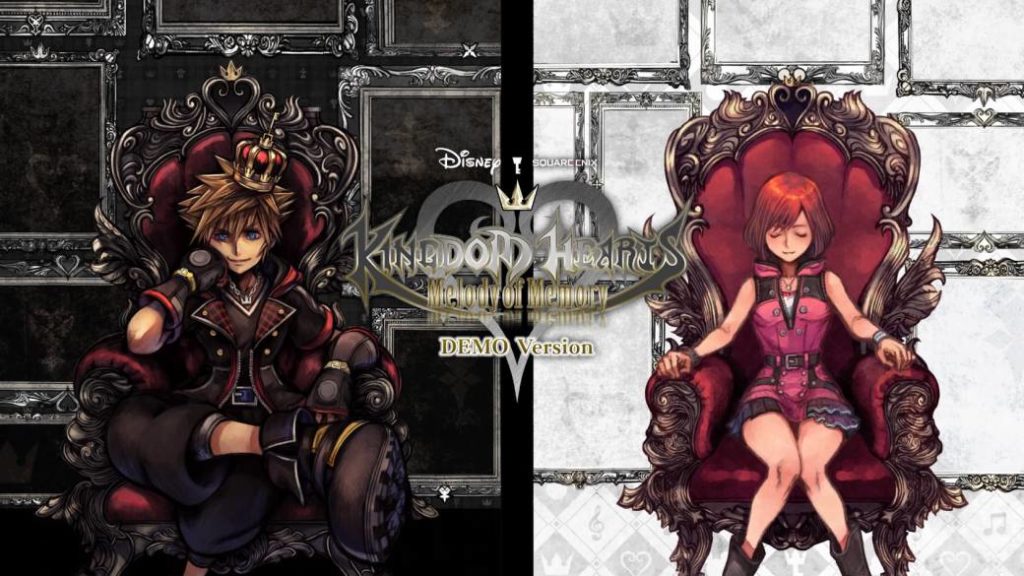 We play the demo of Kingdom Hearts: Melody of Memory and we bring you our first impressions of the new title in the Square Enix saga.

Kingdom Hearts is a saga created by Square Enix in collaboration with Disney Studios and designed by Tetsuya Nomura that since its inception in 2002, eighteen years ago, has conquered millions of players around the world. We could say that it is one of the franchises that has appeared on a greater variety of consoles, since we have been able to find exclusive deliveries for PS2, others for Nintendo DS and some even on Game Boy Advance. Throughout all this time he has added up to eight main deliveries and several compilations that bring together more than one of them, mainly intended for PlayStation 4.

What we have not had until now is a musical and rhythm game. Melody of Memory arrives to fill that gap and propose us a challenge with which to enjoy the magnificent soundtrack of the saga. With more than 140 promised themes, we will be able to unlock different characters and challenge our friends to beat our scores or to join us in split-screen local cooperative mode. 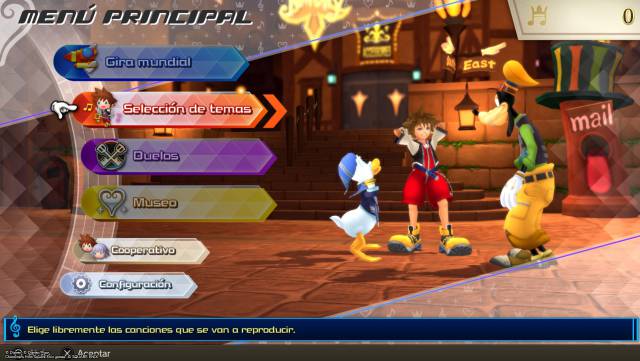 After having played the limited demo of the title in question, we bring you our first impressions about this new proposal, which somehow finds its place within the saga and which will contain various elements and plot keys that no fan of Kingdom Hearts would want to go through high.

To begin with, the demo menu welcomes us with various blocked options, so we have not been able to see first-hand the particular characteristics of each mode. Even so, we can get an idea that “World Tour” will refer to the story mode, in which we can discover that promised fragment of argument that Normura and the team have hidden in Melody of Memory. 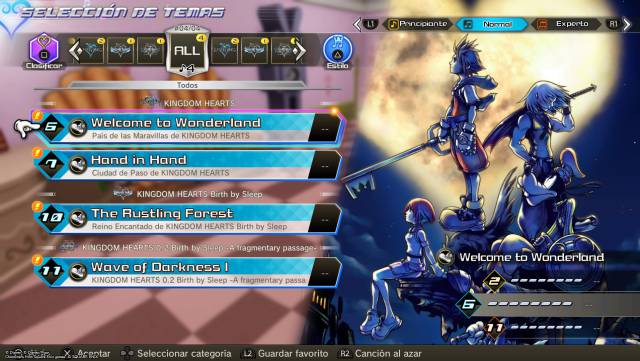 Regarding the selection of themes, we can freely choose the songs that we are going to reproduce and play. They are organized by games, but we can classify them by their style and choose the level of challenge we want to face between beginner, normal or expert. We must point out that, after trying the three difficulty modes, we did not notice too much difference between them, so unless they modify it from here until launch, we should not expect that the expert is crazy and the beginner a walk.

The available songs that we could try are “Welcome to Wonderland”, from the Wonderland of the first Kingdom Hearts and “Hand in Hand”, the mythical tune from Ciudad de Paso. The Enchanted Kingdom with its “The Rustling Forest” is to represent Birth by Sleep, while “Wave of Darkness” is included as part of KH 0.2 Birth by Sleep – A Fragmentary Passage. With up to a total of 140 songs promised for now, we can expect to find both songs tied to the magical worlds we visit in the main games (and their compilations with remixed OSTs) as well as some character characteristics or key scenes that most fans will remember. 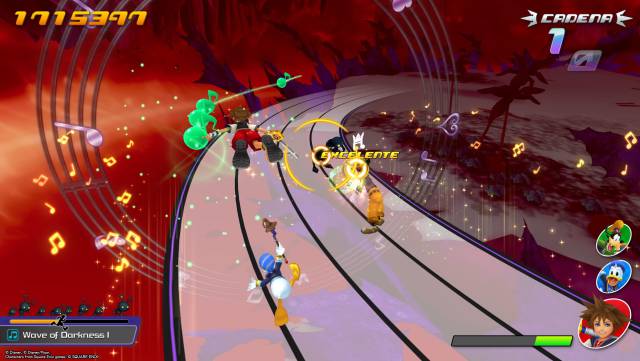 If we continue exploring the menu we can discover a Dueling section, which probably refers to the competitive multiplayer mode in which we will have to bring out our musical skills to face others. If what we want is to collaborate, we have the cooperative, which we could prove. In it we find different songs like “Sinister Shadows” from KH2 or “All for One” from the Country of the Musketeers by KH3D Dream Drop Distance. Each player carries a controller and controls a character (Sora and Riku in our case) to divide the four lines of the track in two and thus be able to collaborate to get shared scores and overcome the proposed challenge more easily.

Finally, we understand that in the “Museum” we can find various items or characters to unlock as we progress in the game, since as we can see in the selection of topics, each character has its own statistics. This, added to the fact that the versions of Sora, Donald and Goofy that we control during the demo are those that correspond to the first Kingdom Hearts, makes us think that we can also see their more advanced versions and even dress them with skins like the ones they wear in certain magical worlds visited during the main adventures. 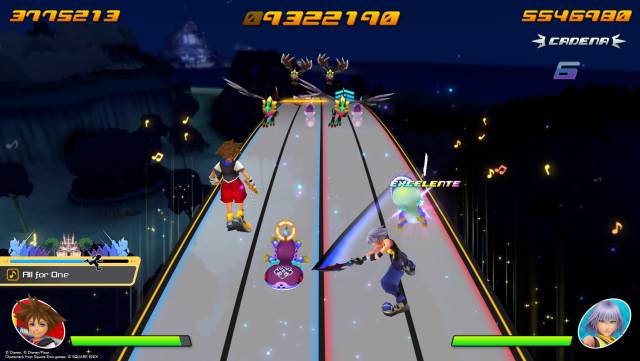 A good rhythm game should have clear, beautiful and satisfying controls. We are afraid to say that, for now, this is not the case with Melody of Memory. Instead of the symbols that we must press at all times to the rhythm of the music appear on the screen, we must remember the control system that they indicate in the first bars of the adventure, that is, in the initial tutorial.

X, L1 and R1 are used to attack the enemies that appear, while O will make us jump (if we keep it we will fly in the air) and triangle will be necessary to activate gems that, in turn, make the protagonists cast spells. Although at first it may seem simple, it will not take long to get involved having to perform several commands in a row and verify (at least in the case of PS4) that the controller does not respond immediately to our actions. 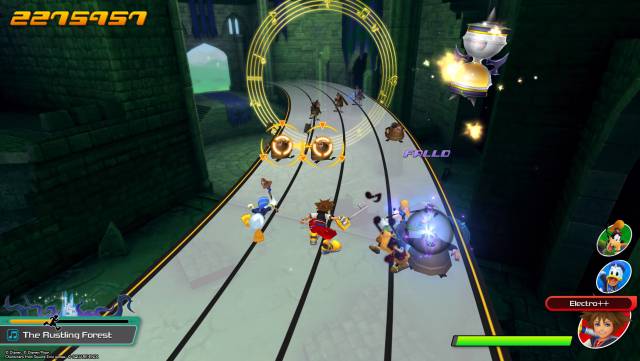 This mapping of controls cannot be customized, so we will have to adapt to it and, eventually, get to enjoy it. Of course, unless in this month that remains until the launch of the title Square Enix manages to polish it a bit and offer more customization options to players, we fear that it will weigh on the overall experience despite being its playable base.

Conclusions; there is still much to discover

It is too early to get an idea about everything that Kingdom Hearts: Melody of Memory has to offer, since due to the short duration of the demo and how limited it is, we have barely been able to understand the totality of what is new from Square Enix. Even so, it has helped us to realize and to ensure that it is a work that fans of the saga will enjoy. It allows us to immerse ourselves in its wide and magical soundtrack and remember those songs that excite us, either alone or in a cooperative. Still, the somewhat imprecise and chaotic controls will mean that fans of rhythm games are unlikely to put Melody of Memory on a pedestal. 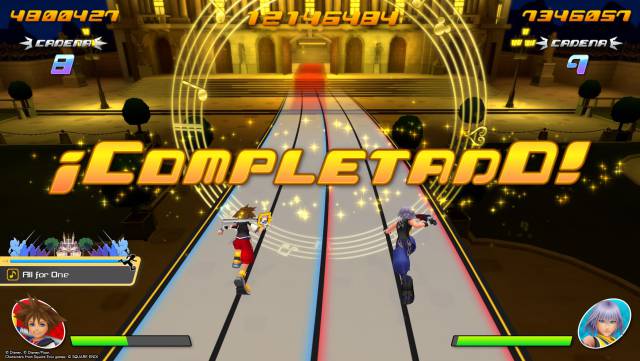 Be that as it may, we will clear up doubts on November 13, at which time the title will become available on PS4, Xbox One and Nintendo Switch to allow us to know an additional fragment of the convoluted and exciting history of Kingdom Hearts as well as we enjoyed an entertaining and varied musical challenge.