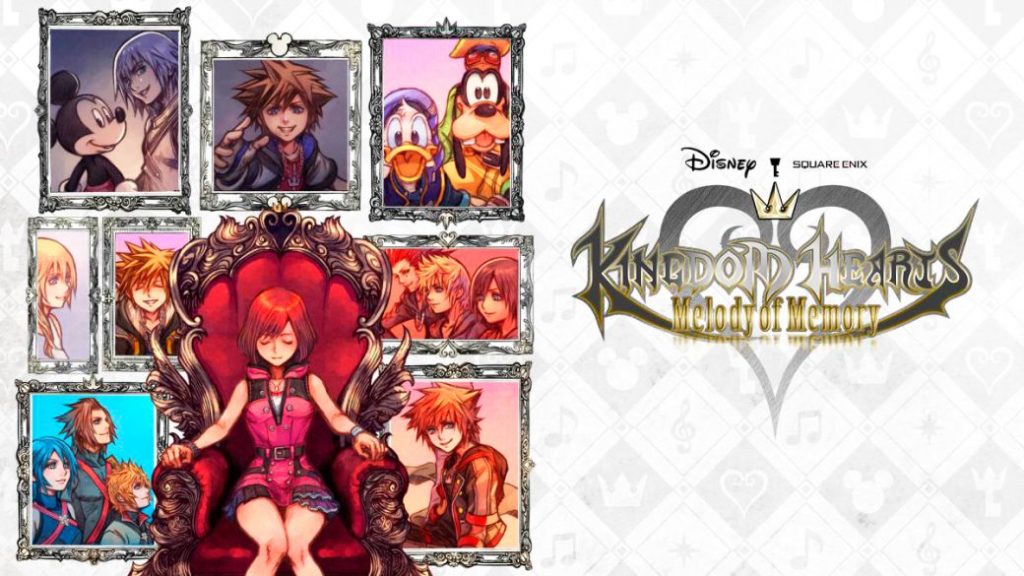 Indieszero and Square Enix offer a perfect title for these turbulent times, a rhythmic adventure that successfully reviews one hundred and a half songs that make up the musical identity of the Kingdom Hearts franchise.

In a terrible year like this 2020, video games can serve as an escape valve from the real world; vivid scenarios, full of detail, impossible fantasies, memorable characters that help us pass the hours and numerous game systems designed by and for the enjoyment of the player. A few days after the launch of PlayStation 5, with Xbox Series X already on the market and Cyberpunk 2077 showing its paw, it is clear that we are going through an intense moment in the community. And it was precisely this context that Square Enix has decided to take advantage of to launch a simple, jovial and carefree title on the market; a tribute to one of the best composers in the history of video games: Yoko Shimomura.

Because Kingdom Hearts: Melody of Memory does not work as much as an expansion in musical-rhythmic format of the franchise created by Tetsuya Nomura as it does as a celebration of the masterpieces composed by Shimomura for almost two decades, with the Kingdom Hearts saga fulfilling its 18th anniversary in Europe in these precise days (remember that it arrived on November 15, 2020 to our territory) seems the ideal moment to dive into magic, the ‘elf’ of this composer’s work, so what we find is, said ‘simple and clean’, a monument to unforgettable melodies that have accompanied us for many years. 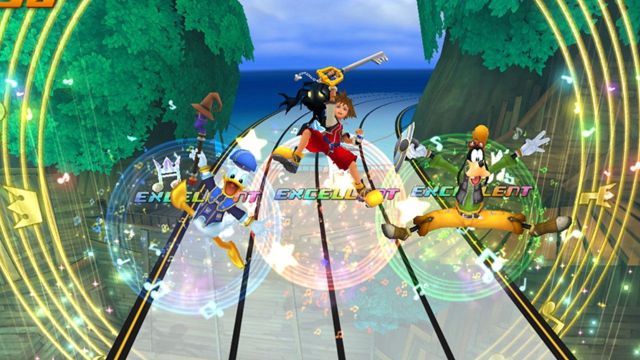 Designed together with Square Enix by the Japanese company Indieszero, Melody of Memory (MoM from now on) proposes a regression to the past and a leap to the future of the series in musical format. It’s an idea that the company had previously explored in the wonderful Theatrhythm Final Fantasy saga, and even in a Dragon Quest-themed version released on Nintendo 3DS and that sadly stayed exclusively in Japan. But understanding that each franchise has its peculiarities and hallmarks, they have not limited themselves to taking the basis of the above and changing the characters and the soundtrack. In that sense, MoM is a breath of fresh air to a formula that worked perfectly but required a little change of scenery for a proper celebration.

The concept being the same (accompanying the melody by triggering several notes) has changed its visual presentation. Sora, Donald and Goofy (or any of the other three groups of characters that we will unlock in the story) advance through a stage that simulates a pentagram while multiple enemies appear on the screen that we have to annihilate in our path. From the simple heartless like the shadows to the big ones, incorporeal or shady, depending on the point or world in which we find ourselves. There are some that require two hits, others that we will have to hit by pressing two buttons or even three at the same time, also using jumps or planning to collect notes.

The distribution of the buttons is a bit shocking at first, generally associated with the position of the character, that is, if we have Donald, Sora and Goofy, we tend to think that the buttons assigned to the blows would be -on PS4- the square, x and circle, a bit like the other musical games on the market functioned by association of color and position. In this case, with a more action-oriented approach to the game, attack with the upper buttons (L1 / R1) or X while the others are saved for specific actions such as jumping or gliding. The adaptation process is not very expensive but it is good to qualify it in case doubts arise beforehand; In general, by the way, it works well, although it is true that sometimes it gives the impression that there is some problem with the detection of the pulsation that can lead us to miss notes without this being something necessarily our fault.

Melody of Memory leaves us from the beginning within its World Tour, a kind of Story Mode in which Kairi tells us as a narrator some of the most important moments of the Kingdom Hearts plot until reaching a final stretch of approximately half an hour where details that fill in the gaps of the end of Kingdom Hearts III are explained. Or rather, they accommodate data for what is to come in the future, because their function is to lay a foundation and explain a certain twist rather than simply adding information. It is a bit disappointing that the plot videos we see so simply summarize the plot of the franchise (something especially notorious regarding Xion in 358/2 Days) but with the understanding that there is no particularly clear intention that this works. As a summary, it is only an excuse to spin songs, it is not a question of complaining too much. There is still the feeling that more work could have been done. 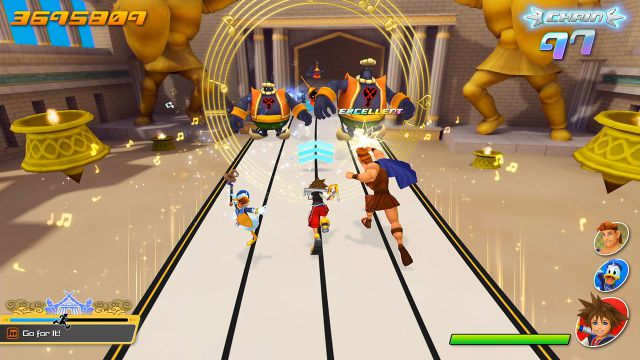 A title that shines on a musical level

As a musical game we are facing a really remarkable title. Not only for the quality of the music, unquestionable, but for the way it is presented and the choice of themes, 150 in total. Divided by world and game, to unlock them we will first have to complete them in the main mode and we can do it in three levels of difficulty, namely, beginner, normal and expert. The difference between them does not lie so much in the speed at which things happen but in the amount of elements on the screen that are introduced and that lead us to have to be more careful in the process of completing the topics, and we have to say that are very, very well balanced. For people to whom this seems little, there is an extra mode (which can be tested even in the demo of the game, for those who have doubts about whether it is right or not) that even adds addresses to all of the above. So MoM is a title that provides content for everyone, whether you are new to rhythm games or want something demanding, here is something for you. All you need to get in is one thing: have a passion for this music. 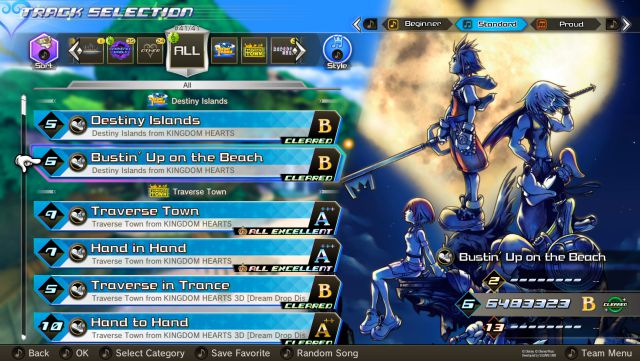 There are also themes that offer another structure, for example, the boss fights change the arrangement of the elements on the screen and we see Sora -or the character we have at that point- sticking with the enemy in a much more crude way and we can even block hits aside from pressing the different buttons. It goes without saying that it cannot be appreciated excessively well either because the attention is focused almost all times on the staff, but that means that Indieszero has done its job well, creating something demanding and that requires our attention instead of staring at the images of passive form.

The same thing happens with the themes of Kingdom Hearts III, which give one of lime and another of sand. The idea is good: play with the rhythmic part while melodies like There’s a Friend in You or Let it Go play while we watch cinematics of the game in the background, but there is only one song per world (normally there are two, exploration and combat) and gives the impression that they have opted for this formula so as not to have to renegotiate the rights with Disney to create something new, instead of simply reusing it. The sensation of “recycling” in this sense is greatly enhanced, especially in this section, but the musical part works so well that it ends up compensating despite everything. 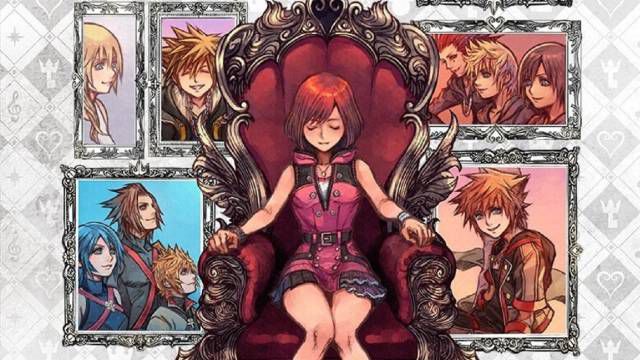 Once past what would be the story mode, is when Melody of Memory opens to infinity. It won’t take long to get to that point and depending on the chosen difficulty level and the skill of each player it will be a different time, but in our case it has been 8 hours, completing 80% of the musical themes. But as we say, that is only part of the whole, because these kinds of games reward replayability, achieving all the missions that are associated with each theme (completing it with a percentage of life, without receiving hits, failing the lowest possible notes) or obtained ranks, in addition to the options that open to be able to unlock content such as art galleries, information about the characters and their worlds … total, there is content for a while as soon as the game clicks you and get hooked on its premise. Not to mention, of course, the multiplayer modes that yes, although they have online options they do not allow us to pair up with friends, something that does not make any kind of sense and that on PlayStation 4 has the Share Play solution, but that in other systems there is no other option but to search and see what we come across.

Kingdom Hearts: Melody of Memory is a beautiful tribute to the genius of Yoko Shimomura and his wonderful compositions for the franchise, a musical and rhythmic title that can be played with any skill level, that allows you to scale it based on what you are looking for and that offers hours and hours of play accompanied by formidable music. Its story mode could be better, as it is still an excuse to link the songs one after another, but the important thing is that both its mechanics and its main objective are perfectly fulfilled. It is not the best game of the year or an indispensable addition to the franchise at the “lore” level, but in celebration of its impressive musical quality, it is a gift for any fan who has ever come up listening to Simple and Clean or anyone at let a small tear escape when the first chords of Dearly Beloved begin to sound in the home menu of the games in the series.