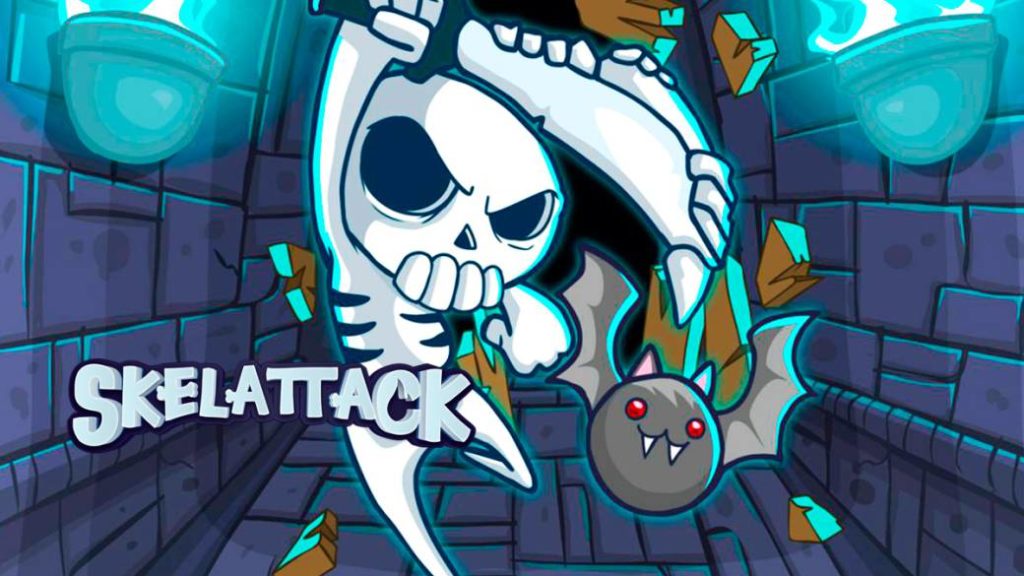 A good proposal, with remarkable ideas and moments, but that ends up staying in the bones of what could have been

A hint of Shantae, a hint of The Corpse Bride, a bat-shaped sidekick companion just like A Vampire Story but more akin to Sonic’s Tails, and echoes of Cuphead in terms of visual and sound details. Skelattack must be credited for wanting to pose a playable challenge and not just a walk, in addition to seeking his own personality. But the result ends up being less than what it promises, especially to be the standard bearer for the new indies edited by Konami.

“Drive your chariot and your plow over the bones of the dead”, William Blake 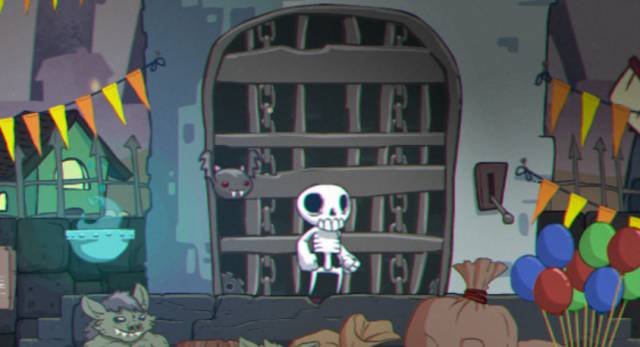 The Invasion of the Living

In the usual Burton twist, Skelattack presents us with a world of the Dead, an Underworld or ‘Underworld’ in which precisely the Living are the bad, and the dead, happy discussing existence and the past – as there is no one. Good jazzy orchestra in the canteen-, they are being invaded by tall, rough guys with robotic movements and who want to loot their ‘loot’. And right here the game starts, which immediately shows its cards: here we have come to jump, to die and to repeat, always to repeat.

The story is minimal, although the enormous verbiage of the characters -almost sometimes it seems that some gullies from the Underworld of Tarantino & Avary have written the dialogues- tries to give it weight. Sometimes they get it – the relationship of Imber and Skully – but other times they become empty and they cut your rhythm in the middle of a playable session for attending an existential exhibition empty annoyingly, plain and simple.

In any case, this is a classic platform, so the narrative is on a secondary plane and what is important is the playable part. Here you will find 5 thematic levels with their 5 Final Bosses and a design that looks at the Metroidvania school, but without applying it to its ultimate consequences – think of a Castlevania Mirror of Fate. There is backtracking, but not so much, and to lighten it there are also a series of portals that move us from one point to another of the level, so in about 5 hours on average you will have finished it.

In general, the levels do not stand out too much, although some like that of the Crypt do have their point, because in this case it brings back those obligatory sections of platform in the 3rd and 4th Gen in which the advance depended on the lighting of the elements of the level, with platforms and enemies that appear and disappear. Special mention to unlocking skills, which increase the pace of the game, especially when your bat companion begins to be able to use her ‘skills’ -one of them in the true Tails style with Sonic-, which gives her more vibe to gameplay.

The main basis of this 2D title is platforms, pure and hard. Jumping is what is most done, followed by exploration and combat, which is rather in the background and sometimes forced – to put a random enemy here and there on the places that we have to jump or guarding a key or switch that we must find / press. In fact, the only grace of combat is when you face a Final Boss, who are at least more varied and fun. The rest of the enemies in the level seem to be set to stop you or make you press another button apart from the jump, since the combat system is simple. 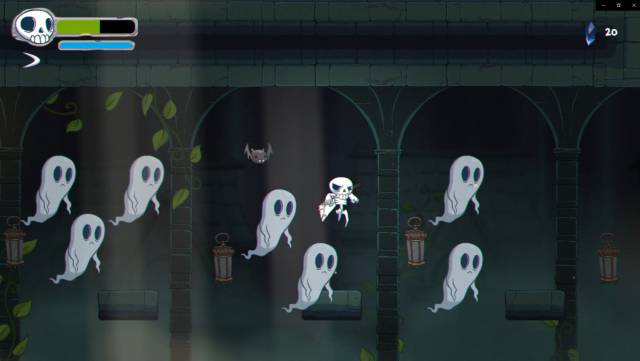 Looking for experiences closer to Super Meat Boy or Cuphead, that Skellatack wants to be a difficult game we like. As if it were a bad phase made in the editor of Mario Maker to challenge friends, each level from the same start in phase 0 to learn to control the fundamentals of the game is a challenge, sometimes crazy for the amount of elements of the stage, mobile or static, that are going to kill you. Because right on that wall that you must climb there is a crossbow shooting at you, spikes and huge blades or the boomerang of an enemy, all coordinated to give us a tiny and exact window of space and timing to hit and go to the next area. Or die over and over again until we succeed.

What we cannot forgive him, is that what could have been a deliberately difficult and enormously gratifying joy to overcome – like Cuphead – becomes a frustrating experience at times because of an element of its gameplay: bouncing on surfaces. Like many 2D platforms, Skelattack has a climbing movement on targets that is done by bouncing with the character from one side to the other, an action that does not require a spider / stick + jump button, but only the spider / stick, moving them from one to the other so that our character climbs the surface to the end.

You can help yourself with the jump and the (very useful) double jump -in fact you get to use a triple jump in the game-, but the problem is that if you don’t maintain the momentum, the character slides across the surface until falling or until you start bouncing to the other side. 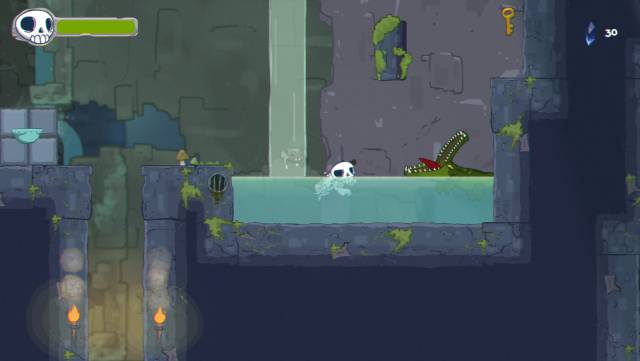 The problem is to fix this action on the stick – crosshead exclusively, since apart from feeling strange and unnatural, many, many times it will be this damn movement that will take you directly to some spikes and bam! Instantly dead. Yes, we have a checkpoint next door, but it despairs not so much because the area is difficult, but because the gameplay becomes unnecessarily complicated by this because it does not have the stick + jump button combination to bounce and give you greater control.

Something that also affects the mechanics of collecting crystals to unlock things, since although you lose them when you die, in the style of other games the loot stays there waiting for you. The bad thing is that if you die several times in a row at the same point, you will lose all the crystals regardless of the care you have taken to keep them with you.

It is a pity, the truth, that this control mapping chosen to simplify the management ends up being the opposite and affects the gameplay of Skellattack, which on the other hand is like that of Cuphead in terms of the very tight control of the character, of those in the that you feel that you have the entire handling of this and it obeys perfectly to your orders, without lag, nor going a frame further or more here. Fluid control with a single black point. 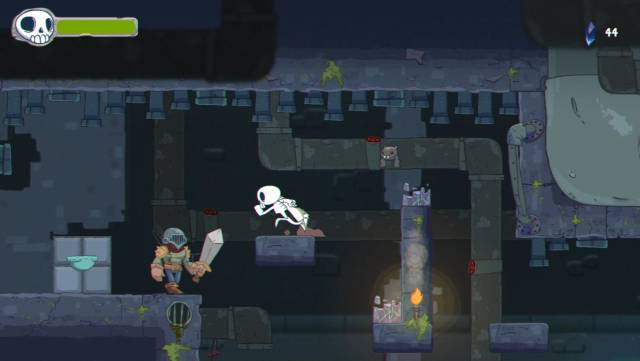 One of its strong points, without a doubt when you play Skelattack, its graphic environment enters your eyes first. The designs seem to take on that animated ‘cartoon’ touch that always gives a game its own personality. It is not as brutal as Cuphead – basically there is no game like that – but taking ideas from here and there they achieve a personal artistic design and beautiful to see that could be transferred to a ‘Stop Motion’ film.

At the execution level, it moves well and is very fluid, but in sections such as enemies or elements here and there on stage, the potential that was on paper is more intuited than the final result reflected on screen for reasons of time and / or budget -after all, we are talking about an indie.

Jamal Green’s music is beautiful, not memorable but very varied. From songs with voices sampled with Theremin effects, we go to the classics ‘Elfman’, to beautiful piano cuts, others with a fair spirit, jazzy touch, in a set that helps to give personality to that micro-universe of the Dead. But unfortunately, the entire game is in English and does not have Spanish subtitles, which are very necessary in this case given the amount of dialogue between the characters.

A good variety of levels, a constant 2D platform challenge, a very tight control and a title with a certain visual personality, it is a pity that Skelattack, Konami’s first (and unexpected) adventure as an Indies distributor, did not go any further because of some erroneous decisions in the handling of the character, in battles or in the enemies. There will be those who do not care and take it as a personal challenge. And beating it is, but they are there, and they make the game a ‘cheat’ experience in many places rather than challenging.