You are here: Home / Preview / This is Frontier Pursuits, the new update of Red Dead Online 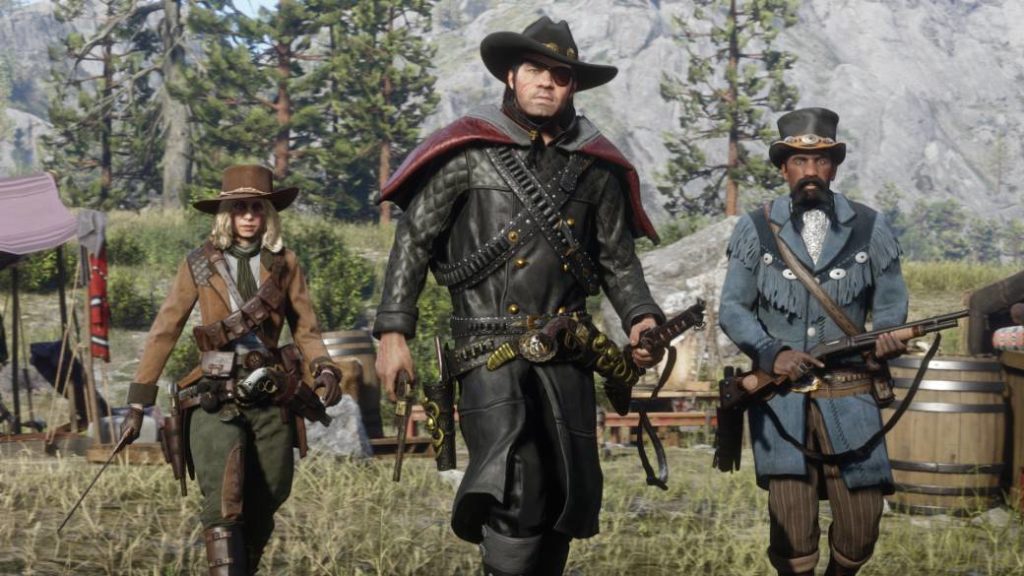 Red Dead Online receives its new major update, Frontier Pursuits, with which it is hoped to lay the foundations for the future multiplayer environment.

Rockstar Games, and Take Two itself, remain in the imperishable idyll that Grand Theft Auto Online has become. There is barely a month left until six years after its landing in the last generation, a testing ground that established the success of the current platforms. Because GTA V remains in the memory of many. But there is life beyond the smell of cheap suntan by the beaches of Los Santos. The outlaws of the Old West try to take a place like a Trojan horse.

As in 2013, the first steps of a project of such magnitude are not always the easiest. Consistency and good work are the ideal ingredients to complete the objective. Frontier Pursuits does not come as one more update, but as the spearhead of a battery of free expansions that will create the playable Red Dead ecosystem. Because this online denies the traditional standard; It is the gateway to a living environment in constant evolution. From FreeGameTips we leave you the keys that are worth riding again at dawn. 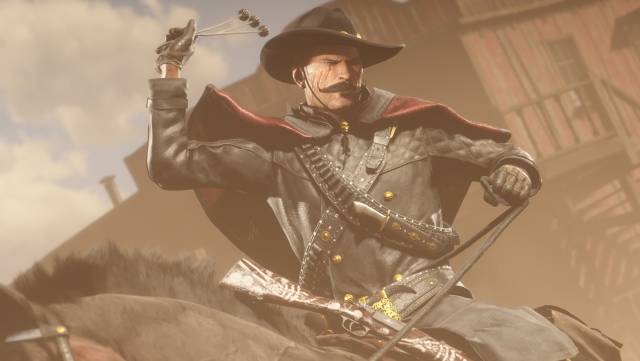 We learn from mistakes

Since Red Dead Redemption 2 arrived at our homes, the main criticism on the part of the users was the slowness of assimilating the orders that we gave to Arthur Morgan from the command itself. The famous ‘input lag’ was a way for the character to show consistency with the world we are in. Fundamentally it is a realistic game, consistent with what would happen in real life. The concessions, in this case, are minimal; Rockstar Games stamp.

The problem lies in the lack of division between the two entities that divide their offer. What you sell in the story mode must conform to the limits of an online environment When we dive into that other side, we find in the competitive modes a clumsy, inaccurate control, quite the opposite of what should be found in the PvP. If one thing is clear is the constant communication between the community and the study. Both live side by side to face the passing of the months in the best possible way.

Frontier Pursuits is the access ticket to a renewed multiplayer from the command itself. All animations have increased speed, from the agility of the character's own body to the way in which he interacts with obstacles, such as boxes, stairs, and so on. In objective modes, the loot will be obtained with unprecedented animation, which reduces the collection time compared to what we were used to. 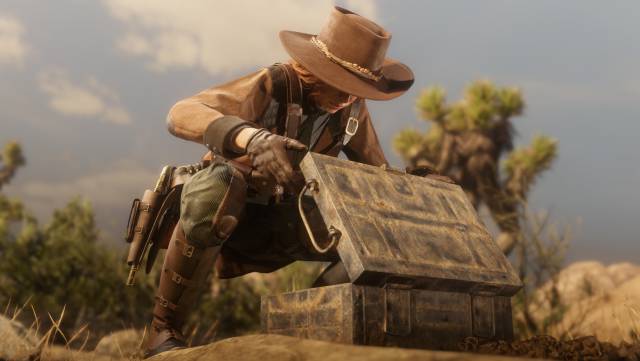 The changes also affect the armament in all its aspects, both to the player's own use and to the balance of his power. The hammering and aiming faster adds the improvement in the detection of the shots, vital record if you want to implement a fair fight where each bullet counts according to the area affected. Bullets that now must not follow the strategy implemented so far, the head shot as a solution to the bullet sponge that resulted in the rest of the body. The number of shells toward the torso needed for elimination has been reduced, while long-distance headshot damage decreases after emphasizing the role played by high-speed ammunition.

Trades of the West, a new way of understanding Red Dead Online

At first we are urged to play the role we want in the free world. Are you going against the rest of the players? Become an outlaw and survive in the steppe. Do you want to help law enforcement? Follow the corresponding mission chain and keep a high karma. But in essence there was something missing that would hook the player into a progression in which to unlock new elements. A similar situation has happened to the horde mode of the recent Gears 5, whose final impressions you can read by clicking here. The concept was fantastic, and in this installment the bases of the different classes have been established so that each player can focus on improving one that matches his style of play. 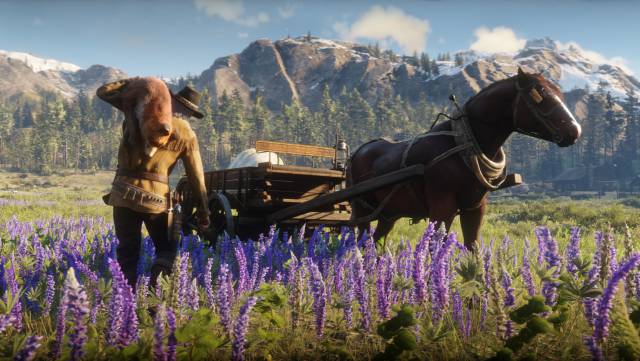 We welcome the trades of the West, a series of specialized roles that turn the player experience into a thematic adventure. Frontier Pursuits incorporates the three initials: Bounty Hunter, Merchant and Collector. Three different ways of understanding the functioning of the Red Dead Online ecosystem. They consist of exclusive unpublished content of its branch of role, which directly influences the camp. For example, the Merchant is focused on setting up our own store within it, creating a business relationship with our transaction company to amass a fortune through the sale of collected and manufactured products.

Although the number of improvements is more focused on passive skills or objects to use from our inventory, the main difference lies in the element that defines it as a role. Following the previous example, we can train a canine companion to accompany us and warn in case they attack the camp. Quite the opposite happens with the Bounty Hunter, in which its improvements are designed exclusively to the range of tools used against fugitives. Tough ties, larger capacity wagons, etc. 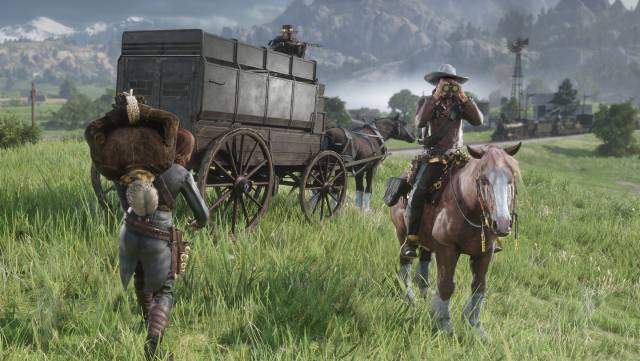 Access to them requires our visit to certain points available on the map, which will be indicated once the update is available. When accepting the order, we must acquire the first piece that confirms us as a faction member. Depending on what may be free if we have met the prerequisite; In the case of the Collector, we can obtain it at no additional cost (from the game currency) if we have collected the 54 hidden cards of Red Dead Redemption 2 in GTA Online. Almost nothing.

The famous battle pass have become the general tonic of the service games. Since Fortnite introduced it in order to incorporate levels of progression that would impact rewards, virtually all of its rivals have followed in the wake. Red Dead Online does the same with the opening of the Wheeler Club, Rawson & Co., a new system that will cover up to 70 levels full of exclusive customization items, including camp accessories. 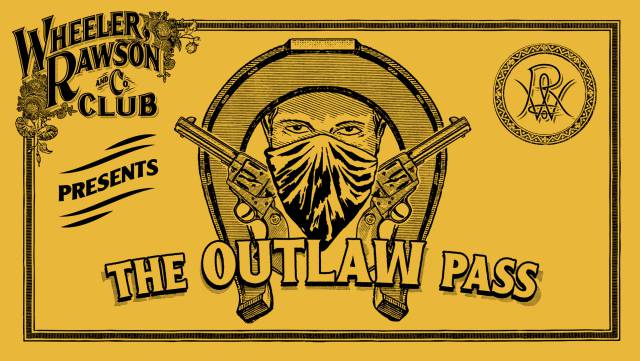 While this modality is completely free, there is at the same time the ‘outlaw pass’, a payment method that complements the Club by doubling the number of items obtained. Accessing it will cost us a total of 35 gold bars; Despite the initial investment, if you are a regular player you can recover its value with $ 550RDO, if you complete all the way.

The outlaw pass is designed for those who enjoy the title with intensity, since all the items received are accompanied by a succulent increase in the experience of the role. If you have progressed on your own and think that the pass can give you an extra bonus, when you buy it, all the levels you have passed through will be unlocked. 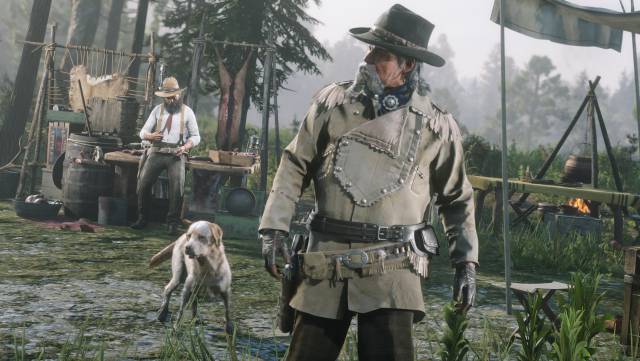 Both the Club and the outlaw pass will be available until November 18. Everything unlocked up to that moment will remain permanently linked to our profile, so there is no need to fear last minute losses.

It's time for the brave

Red Dead Online lives with Frontier Pursuits its best moment since leaving the beta period. Rockstar seems to underpin the foundations on which to establish a unique online environment, of which they will remain omnipresent in the industry as has already happened in previous work by Americans. It is a matter of time that the numbers grow like the foam.

These additives recited in this text are only a preview of the string of news that it includes. To know them in detail, we urge you to go to the official channels of Rockstar Games. Frontier Pursuits arrives today, September 10, on Xbox One and PS4.