You are here: Home / Digital Extremes / Warframe presents Heart of Deimos, its new expansion, at TennoCon 2020 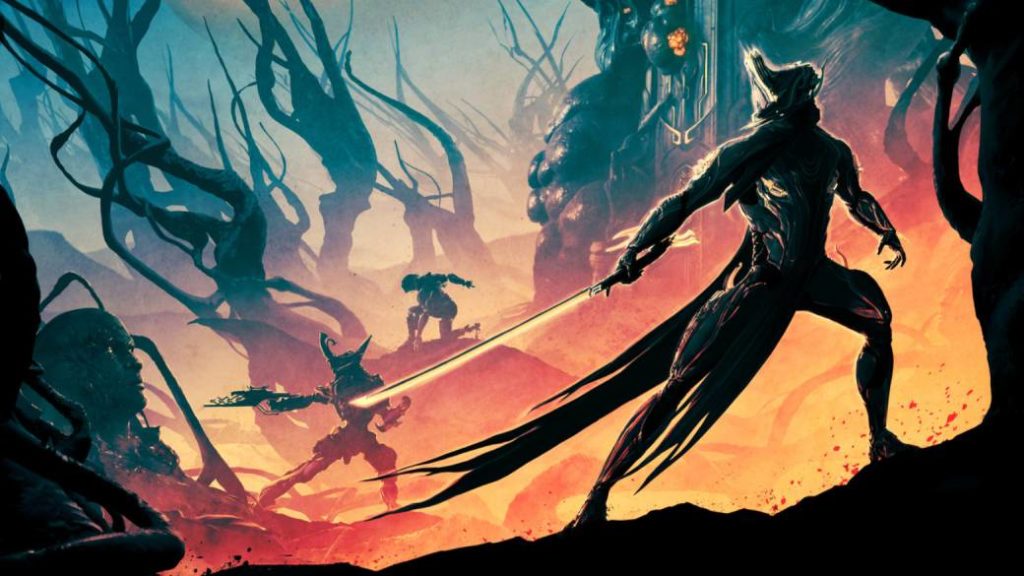 We attended an exclusive presentation of Heart of Deimos, the new Warframe expansion that will be available soon on PC and consoles.

At this point in 2020, it is no surprise to anyone that we are living in an atypical situation caused by the COVID-19 pandemic. As far as the video game industry is concerned, it has affected in various ways that have resulted in practice as delays in some launches planned for these months and in transforming the usual events and fairs into alternative digital versions. This is the case of TennoCon, a program dedicated to presenting all the news of Warframe, the Digital Extremes F2P cooperative action title.

Last year 2019 (when they presented Empyrean, the great expansion) we attended the event in person, but this time we have had to follow it from the safety of our home. Even so, we have had access to a half-hour demo in which the developers have directly explained to us everything related to Heart of Deimos, the new expansion that will arrive at Warframe on August 25. As we have been told, it will do so simultaneously on all platforms (PC, PS4, Xbox One and Switch). Here is everything we know about this new downloadable content, which will come to further expand the universe of the game and give veteran players a chance to continue enjoying their space adventures. 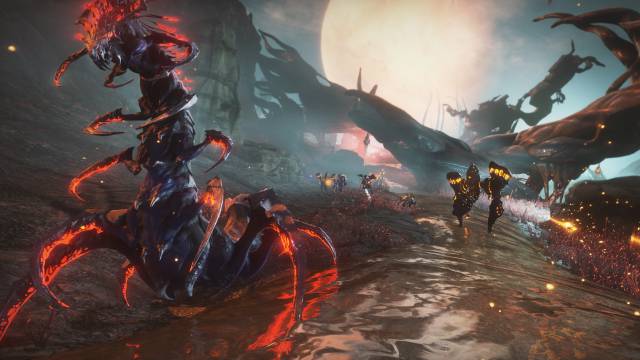 A new and deep customization system for Warframes

For starters, they assured us that the demo we had access to corresponded to the first section of the main mission provided by this expansion. In it, we can visit one of the moons of Mars, Deimos, in order to discover all the mysteries that are hidden there and face the dangers that await in each crater. Even so, before starting our ship to reach the new destination, there is a great novelty that we can discover at our central base: the “Chrysalis system of Helminth”. Thanks to this monstrous being we will be able to personalize our Warframe “to the next level”.

By this we mean that we can inject new powers as “Shock”, which we can absorb from various enemies, in exchange for supplies such as biotics. Something they make sure to make clear from the development team is that once we change the ability of our Warframe we will not be able to go back unless we modify it manually, so they recommend having more than one character with different characteristics. to adapt to each type of mission we face. 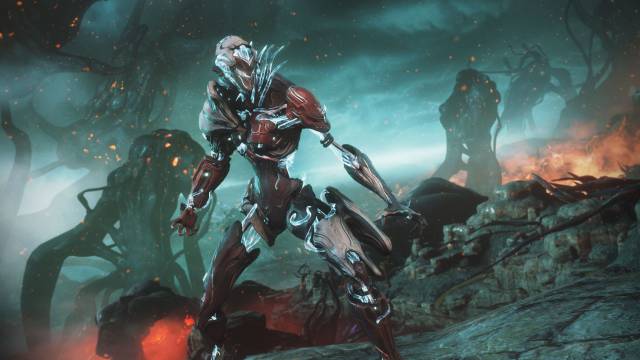 This new customization system is “one of the most complete to date”, which is why they point out that veteran players will be the ones who really enjoy spending time modifying the parameters, characteristics and skills of each of their Warframes. This is because the more we advance in the game the better we will be able to understand all its systems (some of which are quite complex) until mastering the work of Digital Extremes and being able to thank the novelties to a greater extent.

“On the stage of a living moon, the new open world Heart of Deimos unravels the murky and complex origins of infested factions, unveiling the lost Entrati family and the wonders of technology and horror they left behind,” details the official description. of expansion. Thanks to it, we can already get an idea about what type of content we will find when we delve into the news of Warframe from next August 25. 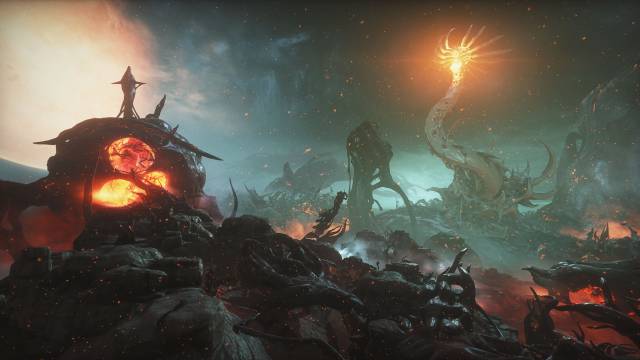 For starters, it will welcome us to the satellite and we will be greeted by a curious floating head with two personalities called Necraloid. One of its faces, more serious and professional, tries to warn us about the dangers of Deimos while asking us for help to solve them. The other, smiling and carefree, downplays the matter and asks us about banal things. This will not be the only character that we will be able to see in cinematics and with whom we will be able to interact, but in this new moon to explore several characteristic rational beings await us, with a remarkable personality and a unique humor.

As for our mission in expansion, we do not have many specific details beyond that we must “prevent a catastrophe internationally.” In the demo they did not want to reveal too many key points of the plot, so we will have to unravel it ourselves at the end of this month of August. Of course, they promise that there will be surprises and that this expansion will allow us to learn more about the lore of Warframe and its worlds. 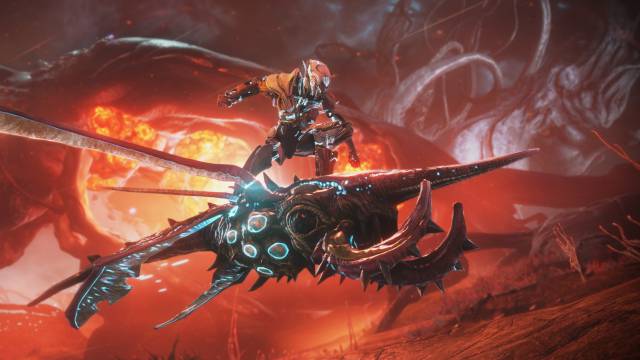 Finish off invading critters and get on the mecha

The main threat that awaits us in Deimos are a species of invading worms, some of which are gigantic in size. Seeing them in action, a mixture between the beings from the sands known in the literary saga Dune and the infernal atmosphere of Doom comes to mind, which from the development team themselves admit having taken as a reference when designing the scenarios and inhabitants of this satellite.

To face them we will need to use our jetpack, in addition to finishing one by one with them and finally destroying the hive from which they arise. Even so, the last bars of the demo make it clear that it will not be an easy task, since we will discover that “the fall of one means the uprising of another” and therefore we must not cease our efforts to eliminate them all to return a relative peace to Deimos. 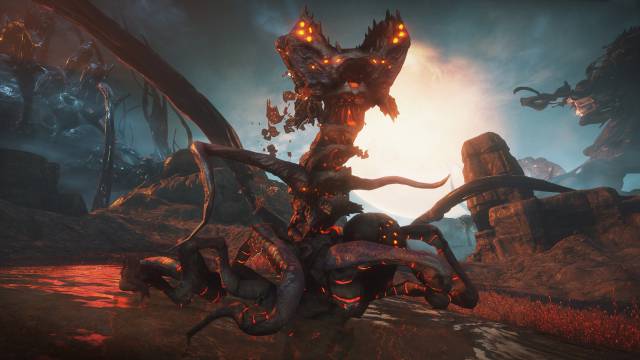 In addition to being able to ride flying bugs to quickly move around the scenarios, we have another great novelty that many will make them decide to acquire the expansion: we will be able to pilot our own mecha. This is a surprise that was left to close the gameplay that we were able to witness, at a key moment in which everything seemed lost and it was clear that we needed more firepower to stop the invading worms. These “Necromechs”, for now, have an unlimited use time but we can only deploy them in certain segments of the moon. For now it is all we know, although there is no doubt that it is a juicy novelty.

Heart of Deimos, an expansion dedicated to Warframe veterans

In short, what we have been able to see from Heart of Deimos makes it clear that from Digital Extremes they intend to continue supporting Warframe with new content and regular updates to further expand their range of playable proposals. Specifically, the development team recommends entering this expansion “preferably when we have enough experience to enjoy all the content.” This is aimed at the veterans of the title, since it will not be easy to face the dangers that await in Deimos and the greater control over the systems and mechanics of the work we have, the better. 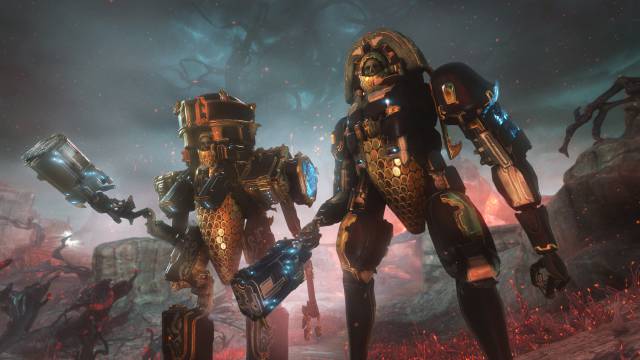 We will be able to answer all those questions that still float in the environment from next August 25, at which time the expansion will become available on all platforms on which we can play Warframe: PC, PlayStation 4, Xbox One and Nintendo Switch.